Who are Cork’s Best Young Entrepreneurs? 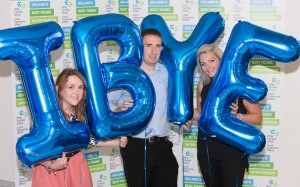 Nine of Cork’s ‘Best Young Entrepreneurs’ were named at an awards ceremony hosted by Cork’s three Local Enterprise Offices (LEOs) yesterday at City Hall. The winners were chosen from 45 young entrepreneurs, shortlisted from almost 150 applicants in the competition launched this summer by the LEOs in Cork, as part of a nationwide search to find ‘Ireland’s Best Young Entrepreneur’ (IBYE).

The campaign saw each of the three LEOs (Cork City, South Cork, Cork North and West) encourage young entrepreneurs from all over the city and county to enter and be in with a chance to win a share of the €150,000 investment fund available. This was the second year of the competition, open to individuals aged 18 to 30, which was judged in three distinct categories following the presentation of their business plan to judging panels in their specific region. The three categories were:

To help prepare for this stage of the competition, the finalists participated in a three day, intensive business boot camp last month which was designed to help them develop the skills required to take their ideas and businesses to the next level – from the concept stage to reality, to building a viable business plan and commercialising their business.

In the LEO Cork City competition, the Best Idea category was won by Breffney O’Dowling Keane, who received €10,000 investment in her company, FruitCubed. FruitCubed are fruit based stock cubes which utilise waste and over-ripe fruits to produce a product with an extended shelf life which delivers a tasty, innovative, nutritional solution.

Jack Crotty of The Rocket Man received €20,000 investment in the Best Established category. Beginning trading from a fold out table at farmers markets The Rocket Man is now a mobile Salad and Juice bar with a fixed premises in Cork City centre, and also features at many festivals and events. They use up to 60 artisans for ingredients and pride themselves in using local ingredients served conveniently around the city.

The title of Best Start-up, and €20,000 investment, went to Gail Condon, founder of Writing for Tiny, which makes highly personalised children’s books about life’s changes, worries and milestones, allowing the child to engage with the story. Gail’s ethos is to include the child in decision making, communicate effectively and to encourage ‘IndieThinking’. Gail also walked away with the title of Young Entrepreneur of the Year for the Cork City region.

In the LEO South Cork competition Patrick Corrigan won the Best Idea category and received €10,000 investment for Musica, his jukebox-like application that allows people to select the music they want to hear. His vision is to let people vote on which songs get played, creating a fun environment where people can connect through their musical tastes and a platform that allows gatherings to listen to the music they really want.

James Foody, founder of Ayda won Best Start-up, receiving €20,000 investment. Ayda is a wearable fertility tracker. Worn during sleep only, Ayda enables women to effortlessly identify their most fertile days and maximize their chances of conceiving naturally. James was also named Young Entrepreneur of the Year in the LEO South Cork region. James was represented at the awards by his colleague, Ian Kerins, Head of Operations at Ayda.

The winner of Best Established Business category, and €20,000 investment, was Stephanie Lynch of On The QT, which showcases the places that as locals we fall in love with and return again and again. On The QT promotes areas, businesses or activities through subtle advertising and digital marketing.

In the Cork North and West competition, the Best Start-Up category was won by Maeve O’ Keefe, scooping €20,000 for her business Inspect 4, which has developed an animal handling crate to improve safety for the operator and the animal, and to reduce the physical work associated with hoof trimming. Inspect 4 caters for both farmers and professional hoof trimmers.

Stephen Murphy won the Best Idea category, winning €10,000 investment in his company, Ride-On from LEO Cork North and West. Stephen has developed a safe, simple, modular, single person system for backing and breaking young horses and ponies. With years of experience in the equine industry, Stephen is ideally placed to move from prototype-stage to a successful business, both in Ireland and internationally.

Winner of the Best Established category, winning €20,000 investment in her company was Aimie Musgrave for Crunch. Crunch offers a healthy food delivery service supplying gyms, fitness centres, and offices with nutritious balanced meals and snacks. They design menus with their customers’ health and taste buds at the top of their priority list, using the freshest of vegetables, herbs and spices. Aimie was also named Young Entrepreneur of the Year in the LEO Cork North & West competition.

The 2015 winners in each of the three categories will now go forward to represent their respective LEO in a regional final in November, and if successful there, will fly the Cork flag at the national final where ‘Ireland’s Best Young Entrepreneur’ will be crowned before the end of the year.

Speaking at the county final, Adrienne Rodgers, Head of Enterprise, Local Enterprise Office Cork City said “Now in its second year, IBYE has once again unearthed a wealth of young entrepreneurs in Cork who we now need to nurture and support. The aim of this initiative is to encourage and support a culture of entrepreneurship among young people in region, to promote entrepreneurship as a career choice, and to encourage the establishment and development of new innovative businesses.”

Adrienne continued “We would like to commend all these brave young people having decided to take the next step in to making their business a success, and we wish them all the very best in their entrepreneurial journey ahead. At the LEOs in Cork, we are proud to be associated with an initiative that will really help launch them to the next level, and we wish the best of luck to the nine Cork winners who will fly the Cork flag in the regional final next month.”

Visit www.ibye.ie for more information on ‘Ireland’s Best Young Entrepreneur’. To follow the progress of Cork’s winners, check out @IBYECork on Twitter and IBYE Cork on Facebook.