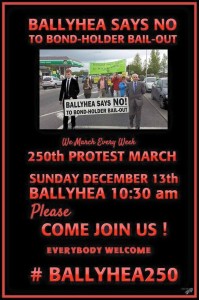 Something significant happened in Cork last Sunday. In the small village of Ballyhea – on the main Cork-Limerick Road – at 10.30am the 250th ‘Ballyhea Says No’ march took place.

Last Sunday we marked week 250 of the Ballyhea Says No campaign against the imposition of odious bank-debt on the Irish people. In the days before and after I was asked many times – how have ye kept going? How do ye persevere with a cause that gets so little publicity? My answer, and it’s rhetorical, not a question – having learned what we’ve learned over the last 250 weeks, knowing what we now know, how can we not.

And God, what we’ve learned.

The message broadcast is that this is a home-grown problem (our Taoiseach leading that particular chorus), that it all began with the Blanket Bank Guarantee of September 2008.

We know it did not.

We read that the ECB were livid with Brian Lenihan and the then Irish government for offering that blanket bank guarantee.

We know this to be nonsense.

BAILOUT YES, BUT FOR WHO?

It has now become accepted fact that in November 2010 Ireland got a bailout from the Troika.

We know the truth.

The Irish people are told over and over that Michael Noonan did a fantastic deal for Ireland on the Promissory Note debt, that he saved us tens of billions.

We’re told that we must live within our means.

We know that under this new debt regime, we will be living well BELOW our means for many decades.

When the Central Bank destroyed two tranches of €500m each last year, three more this year, a total of €2.5bn received from the sale of Promissory Note bonds, our national media was silent, no comment.

We also know the Central Bank of Ireland is holding a further €25.5bn of Promissory Note bonds to be sold (including the balance of the 2012 bond), the billions thus raised also destroyed but all those billions eventually to be repaid, along with the interest accrued.

WHEN DOES A WRONG BECOME ALRIGHT?

We’re told that nothing can now be done about any of this, that it’s all too late, water under the bridge, and sure aren’t we out of the woods now, unemployment falling, everything hunky-dory and this government proven right.

Again, we know the truth.

Over the last several years we too have been adversely affected by all that’s gone on, we too have lost loved ones to emigration, to suicide; we want desperately to see a recovery, a real recovery. But we know, what was done to us from 2008 to 2011, the transfer of all that bank debt, was wrong and that wrong has never been righted; we know that much of the pain that has been inflicted on us is directly related to that odious debt. And we know, lift that burden and Ireland will soar.

Knowing all this, how can we stop?

This is a fight that MUST be won, a fight that will be won. Our first challenge is to shine a light on what has happened, to let people know. When that’s done, when YOU all know what we know, we’re certain – you will be with us on this campaign.

The weekly Ballyhea march is not associated with any of the major political parties.

However, in a statement last weekend Leader of Sinn Fein Gerry Adams TD expressed solidarity with ‘Ballyhea Says No’ group

“I want to commend you for steadfast campaign against the payment of the toxic debt.

“Sinn Féin stands with you, and we share your view that we had no obligation to honour the debts of financial speculators and gamblers, and it is our children who will bear the cost of the government’s failure to effectively negotiate, at EU level, in the best interests of the Irish people.

“Your 250th week of protest is set against a backdrop in which the establishment is trying to ensure the publication of an incomplete and inadequate final report from the Banking Inquiry.

“As you might know, our Finance Spokesperson Pearse Doherty TD has refused to sign-off such a report.

“It has been left to campaign groups such as the Ballyhea Says No, to a handful of Oireachtas members like Sinn Féin TD Pearse Doherty and our MEPs to do the government’s work.

“I want to assure you that Sinn Féin will continue to work together with all parties and Independents of like mind to ensure we remind Europe that a deal on our legacy bank debt is a necessity rather than an aspiration.

“Congratulations on all that you have achieved to date. Your dedication is a shining example of empowered and principled activism.

“You have not stopped looking for answers.
You have stood your ground.
You have refused to shut up.

“Your perseverance is genuinely appreciated by those who work for social & economic justice and equality.

“It is a pity that you do not have a government worthy of your commitment, one that would truly defend your rights as Irish citizens.

“Hopefully, we can change that in the coming weeks and, in doing so, begin the crucial work of building a real republic.