Cork County Cllr Alan Coleman, an Independent Candidate in the upcoming general election in Cork South West, has said that the works which are due to commence this week are the least the people of Bandon deserve after the two devastating floods suffered by the people of the town in December 2015 and January 2016.

The works confirmed by Cork Council Chief Executive, Tim Lucey, today include the instillation of non-return valves at all entry points from the river. Proposed Works also include extending the defensive banks along the River Bandon adjacent to the Lidl store in the town.

‘This is welcome news for the people of the town as they have been to hell and back in recent months. Having experienced unacceptable delays with an overly bureaucratic tendering process led by a central Government Agency in The Office of Public Works this action is a reprieve for the resilient people of this West Cork town.’ 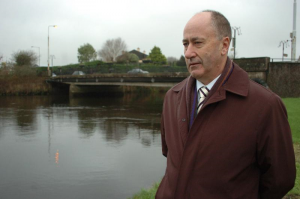 ‘People’s patience with flood defence scheme delays has been well tested and we just want to see action. Today’s news of these developments are welcome but at the end of the day these works are well overdue. I sincerely hope that there will be no further unnecessary delays’