The Clonakilty West Cork Rally 2016 has been launched 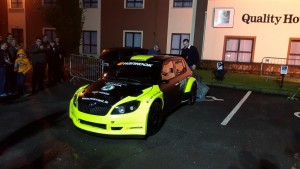 The 38th Quality Hotel West Cork Rally which is promoted and organised by Cork Motor Club will take place on the 12th & 13th March next. The event is the second round of the Clonakilty Blackpudding Irish Tarmac Rally Championship, the opening round of the FIA Celtic Trophy (part of the new European Rally Trophy), the opening round of the PlasticBags.ie Southern 4 Rally Championship and a round of the Cork Motor Club Championship. The Quality Hotel Clonakilty will once again be title sponsors and headquarters for the event, while club are also delighted to announce that Jim Davis & Sons Building Contractors will come on board as associate sponsors for the event.

The rally will run under an international permit for only the second time since it began in 1977, and the only previous time it did so was in 1986. The 2014 & 15 winner Donagh Kelly has signaled his intent to come back to attempt to become the first driver to win the rally three times in succession and the reigning Tarmac Champion also regards Ardfield as one of his favourite stages in rallying. With Class 5 now being the highest class eligible to win the Clonakilty Blackpudding Irish Tarmac Championship, the closeness of the competition in Galway should give spectators a lot to look forward to, with championship leader Keith Cronin among those expected to take part.

There is a lot of interest in the event throughout the island of Ireland while England and Wales will provide the bulk of the overseas entry. The Clonakilty West Cork Rally Committee who raise funds for the event each year is offering €100 in vouchers to the first 20 overseas entrants to the rally. Two Cork drivers will be upgrading to newer machinery for the coming season, with Owen Murphy making the switch to an ex Freddy Loix Skoda Fabia S2000 and Clonakilty driver Cal McCarthy having purchased a Citroen C2 R2.

Clerk of the Course Greg McCarthy has said the format of the event will remain the same as previous years, eight stages on the Saturday and six stages on the Sunday with centralised servicing in Darrara Agricultural College. Road mileage will be low in comparison to stage miles and will feature many of the classics such as Ring, Ardfield and Sam’s Cross, some of which are on the Wild Atlantic Way, showcasing the stunning scenery around West Cork. Regulations can be downloaded from www.westcorkrally.com and www.corkmotorclub.com and further event details will available on these sites in the coming weeks.