On Saturday the 23rd of April, on a beautiful sunny Clonakilty day, the Mayor of the County of Cork John Paul O’Shea officially open the Michael Collins House Museum.

The invited guests and public were regaled with stories of the Collins family form Helen Collins and also enjoyed musical interludes performed by children from the area. The Mayor then proceeded to unveil a Plague to declare the museum officially open to great applause from the gathered crowd. 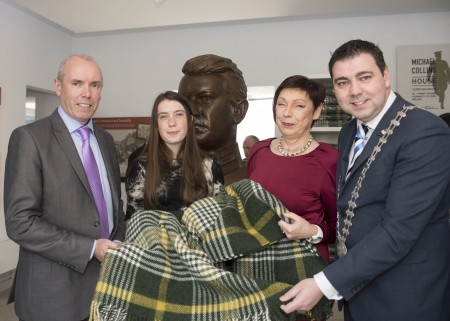 The Michael Collins House Museum will tell the story of the struggle for independence in Ireland from 1798 to 1922. The story is told with a focus on three local patriots, Tadgh an Asna and the 1798 rebellion, Jeremiah O’Donovan Rossa over the late nineteenth century and of course Michael Collins, covering the war of Independence and the Irish Civil War.

Speaking at the opening Cork County Mayor, John Paul O’Shea said “The Michael Collins museum portrays our shared history in a unique fashion. It transports the visitor to that time, 100 years ago. It brings to life living at the turn of the century. The house is as it was then. It transports us to the past. Living and breathing this experience is what makes our history real and relatable. We understand and become familiar with life and the pursuits that have shaped our history.”

The Museum is now open at weekends and extended opening times will begin soon.