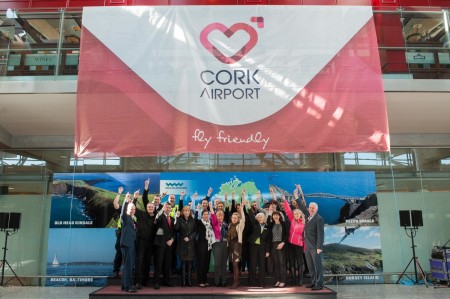 Cork has been selected as the location for a major international aviation conference next year following a competitive bid by Cork Airport. The announcement that the 2017 conference will be held in the South of Ireland was made at the Airports Council International (ACI) EUROPE Regional Airports Conference.

There was other good news for the airport as it was shortlisted once again for the ACI EUROPE Best Airport Awards. The airport will be judged in a number of categories in this year’s awards which recognise excellence and achievement across a whole range of disciplines relating to airport operations.

Niall MacCarthy, Managing Director, Cork Airport said: “We are very excited to have secured this important aviation conference for Cork next year and to be shortlisted for these prestigious aviation awards once again. By bringing delegates from across Europe we have a great opportunity to show what the region has to offer and create more business links.”

Speaking in relation to the award nomination, Mr MacCarthy said: “We were the best in the world in 2013 in our category and we’re hoping to be best again in 2016,” he said. “We’ve reached the top eight which is very heartening and we’re hopeful that we will get into the top three at least.

“There are hundreds of airports in Europe so we are up against some really good airports and the award is quite prestigious. To get peer recognition like that is very special.”

Next year will be the 10th year of ACI EUROPE’s conference and exhibition dedicated to regional airports. It will be held in Cork in May 2017 and it is expected to see hundreds of delegates travel from across Europe. The Regional Airports Forum is intended to provide a platform for regional airports to exchange knowledge, share best practice and discuss issues of common interest. A reception was held at the Residence of the Irish Ambassador to Lithuania H.E. David Noonan last night to formally mark the announcement that Cork will host the event. The reception was attended by members of the ACI Regional Forum, the Ambassador’s wife Mrs Cliodhna Noonan as well as a Cork Airport delegation.

In 2015 Cork Airport was named in the top three in the ACI Europe Best Awards for facilities, retail, security, community relations, customer service and environmental awareness and operations.

Award entries are currently being assessed by a panel of expert judges and key stakeholders. Winners will be announced in front of an audience of 400 Chief Executives and industry leaders as part of the proceedings of the Gala Dinner at the ACI Europe General Assembly, Congress and Exhibition on June 21st 2016 in Athens. The membership of the ACI covers 450 airports in 45 countries across Europe.