All are invited to witness the installation of the new Mayor of Clonakilty this Thursday evening (9th) at 8pm at Asna Square.

The ceremony will be similar to last year’s one at the same location. Anthony McDermott will receive the Mayoral Chain and Robe from outgoing Mayor Cionnaith Ó Súilleabháin, who is concluding his one-year term. 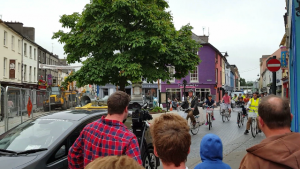 Clonakilty is the only town in the country now with a town mayor. In May 2014, all 80 Town Councils, and with them the position of statutory Town Mayors, were abolished by the then government. There was a lot of anger and resentment in Clonakilty, and while the community accepted that they couldn’t resist the government move to abolish the town councils, they were adamant that the position of a figurehead to represent the town and it’s people and the wider hinterland, should continue.

Local community organisation, Dúchas Clonakilty Heritage, set up a sub-committee and after six months of work, research and planning, organised an open election on the day after the statutory County Council and EU elections on 23rd May 2014. The purpose was that the people could vote for their choices of candidates, five of whom would go on to hold the title of “Mayor of Clonakilty” for one year each, based on their mandate from the people.

It has proven to be very popular and successful. None of five successful candidates in the election are Councillors (although four of the five were former members of the town council), and all stood as community, non-politicial candidates. They are totally voluntary, unpaid and receive no expenses.

like his predecessor, Colette Twomey, has had a very busy year, attending on average 20 local community events per month.

The outgoing Mayor will give a “short speech” outlining a synopsis of his activities during the year, before handing over the Mayoral Robe and Chain to his successor Anthony McDermott who will “hold office” until June 2017.

The ceremony will be held outdoors at Asna Square at 8pm this Thursday 9th June, and all are welcome to witness the historic occasion.