This coming Thursday, 23rd June at 1.30pm, the Lord Mayor of Cork, Cllr. Chris O’Leary will officially unveil a new monument celebrating the memory of the Members of the Cork City Battalion Irish Volunteers on Active Service under Arms to achieve the freedom of Ireland as an Independent Republic in Easter 1916.

The monument which is situated at the top of South Mall at its junction with Parnell Bridge was commissioned and donated by the family of Seán Murphy, Vice Batt. O/C and Brigade Q/M, the sole surviving Brigade Officer following Independence. 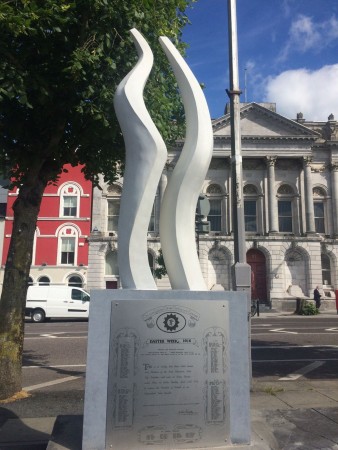 Acclaimed Cork sculptor Mick Wilkins completed the work to coincide with the year long centenary celebrations of the 1916 Rising and the monument has been gratefully received by Cork City Council on behalf of the people of Cork City.

Speaking in advance of the unveiling an tArd Mhéara Cllr. Chris O’Leary said ;

“ It is a great honour for me to unveil this monument which has been gifted to the city of Cork by the family of Sean Murphy. This monument is a fitting and lasting tribute to all those men who fought for our independence. In this centenary year of the 1916 Rising it stands to remind us all of our history and ensure that these men are not forgotten by their city”

The monument comprises two forms representing the two channels of the River Lee. They rise up from the base block to leave the form of a budding lily between – the recognised symbol of the Easter 1916 Rising.

The flames of a fire representing the violence and upheaval of the period, including the subsequent burning of Cork City and nearby City Hall by British forces, or

As two hands coming together in prayer to signify remembrance of the men of the Battalion.

The base block of the monument contains a plaque replicating a Service Certificate that issued in 1948 to each Member of the Cork City Battalion. The plaque lists the names of the men from A, B, C & D Companies of the Battalion and members of Fianna Éireann.

The bright white colour represents the peace currently enjoyed throughout the country.

Members of the public, Relatives of those listed on the monument, Members of the Cork City Battalion 1916, are most especially welcome to attend and to take part in the ceremony.