As part of its ongoing commitment to be at the forefront of safety, Cork Airport has added a modern, next generation fire fighting vehicle to its fleet. The vehicle, known as an Avenger, will replace an older machine that has served the airport’s Fire & Rescue Service for many years. 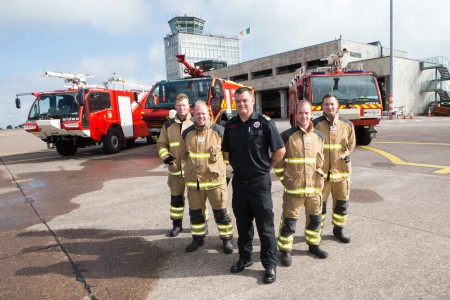 As well as the investment in the new vehicle, Cork Airport is also significantly investing in the development of a new, state of the art aircraft firefighting simulator. The simulator will allow for extremely realistic training scenarios to be applied within the ongoing training programme, ensuring the crews are fully prepared for any situation that may be encountered at the airport.

Jim Johnson, Chief Airport Fire Officer at Cork Airport said: “We pride ourselves on delivering the highest quality of training in rescue and firefighting to our fire crews here at the airport. The purchase of this modern and highly capable vehicle will further add to the high standards we have in order to provide the maximum possible level of safety to the travelling public.

“Today’s announcement represents an overall investment of over one million euro in firefighting, rescue and environmental compliance all of which is funded from the airport’s own commercial resources,” he added.