The English Market, Ireland’s oldest indoor food market, today handed over a cheque for €1,905 raised over Christmas to Cork Penny Dinners, one of the county’s oldest caring charities that was set up to ensure everyone who visits gets a hot nourishing dinner.

Every Christmas the English Market traders and management nominate a charity to raise vital funds for and this year Cork Penny Dinners were the worthy recipients of the money raised.

The English Market Cork put together a Christmas hamper worth over €1500 with produce from each of the 46 stalls in the market, and on December 20th sold raffle tickets for this. The bumper English Market Feast Hamper was then raffled, with all proceeds of going directly to Cork Penney Dinners. The team at The English Market also had collection buckets set up around the market for people to give as much as they could throughout the day. 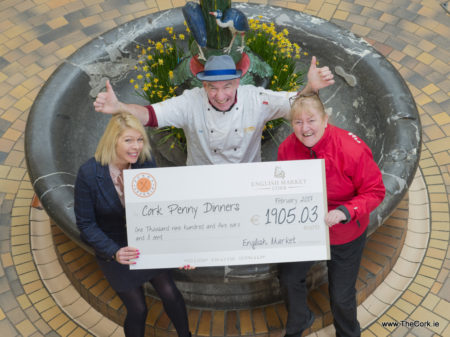 Speaking about the Christmas charity initiative, Manager of The English Market, Órla Lannin said “Each year we want to give back to the community in some way and every Christmas we nominate a local charity who we raise money for. This Christmas we were delighted to support Cork Penny Dinners, a charity that does such great work in our community. We did our very best to raise as much money as possible on the day for the charity, with signage displayed throughout the market to advertise the raffle. All the traders and the team here at the market actively encouraged people to dig deep and give as much as they could and we were delighted with the response. To add to the atmosphere in the market that day, entertainment was provided by ‘Velvetones’ who performed for two hours in the market.”

Caitriona Twomey from Cork Penny Dinners who accepted the cheque on the charity’s behalf said “We are always so grateful to The English Market and the support they provide us with throughout the year. We are thrilled that they selected Cork Penny Dinners as their charity for their Christmas campaign this year and want to thank them sincerely for the efforts they put in and the substantial amount of money they raised. This money will go directly towards our work in the homeless community.”