Liam Edwards, proprietor of Jim Edwards Bar and Restaurant in Kinsale, is the new president of the Restaurants Association of Ireland (RAI).

The appointment was announced at the organisation’s 46th Annual General Meeting and Conference at The Lodge at Ashford Castle, Cong, Co Mayo, on Monday.

Speaking at the event, Edwards, 43, said the year ahead would undoubtedly pose challenges for the restaurant industry as the fallout from Brexit is felt, skills shortages persist and the cost of running establishments continue to rise. 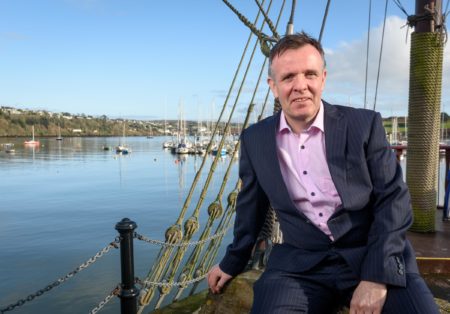 Liam Edwards, proprietor of Jim Edwards Bar and Restaurant in Kinsale, is the new president of the Restaurants Association of Ireland (RAI). Picture: John Allen

However, Edwards, who runs the family business set up by his father Jim in 1971, said there was no place for negativity during his tenure and in the year ahead, members would be encouraged to focus on the positives and work closely with government and other associations to boost Ireland’s profile as a serious contender on the global food stage.

“In the year ahead I hope to build on the positives within the restaurant business,” he said. “Through the RAI, I look forward to working with likeminded groups – the Irish Hotels Federation, the Licensed Vintners Association and Vintners Association of Ireland – who like us, want to make Ireland’s hospitality and tourism industry the best it can be.

“For this to be successful, we will need to work closely with government and I look forward to meetings with our ministers for tourism, health and education. Let’s bring what we know – that Ireland is a country rich with culinary skills, food knowledge and good eating – to a global stage. Why shouldn’t Ireland be a global player in the preparation and delivery of quality food?”

During his speech, Edwards said he would continue to raise the profile of food preparation and nutrition as key subjects for the school curriculum. One of the ways, Edwards plans to tackle this is through new proposals to encourage secondary schools to consider an understanding of food and nutrition as a potential subject in transition year curricula.

“An education is not just the three ‘R’s but should encompass the wellbeing of a person, the art of eating well,” Edwards told RAI members at the AGM. “That means an understanding of the sourcing of fresh ingredients, the journey from clay to cutlery, and the preparation of food to ensure what you are eating is rich in nutrients and a different class from the processed world of ready meals or microwaveable dinners that so many time-poor families depend on. It will only take one person in a family to understand the dynamics of food preparation to implement change across their family’s eating habits.”