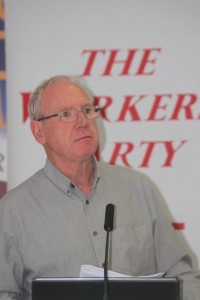 Cllr Ted Tynan is the only elected Workers Party in Cork

Workers’ Party Councillor Ted Tynan has said local people should have been consulted about the proposed move of Mayfield post office from its current location to the Mayfield shopping centre. He has also expressed grave concern at the wider proposal before An Post to close up to 200 local post offices around the country.

The Mayfield councillor said that post office at Kerry Road, near the Cotton Ball, was a centrally located and a well established office. The premises had changed hands some months ago after being run for many years by the same family. Now it is to be moved to the other side of one of the busiest roads in the city, to Mayfield shopping centre..

“Local people should have been given an opportunity to have a say on wheter the post office is moved”, said Cllr. Tynan. “It is well established and conveniently located, serving people over a wide area of Mayfield and the surrounding area.”.

On a wider issue, Cllr. Tynan has expressed alarm at the possibility of widespread post office closures around the country. First there were reports in the media last week that up to 80 post offices, mostly in rural areas, were to be closed, now that figure has risen to 200.

Cllr. Tynan noted that the latest proposal was drawn up by businessman and Dragon’s Den contestant Bobby Kerr who was engaged by An Post to draw up the plan on a purely business basis which ignored the social aspect of the post office service.

“This plan is the brainchild of a hard-headed business executive who has completely ignored the social value of post offices to a community, whether rural or urban. A local post office is more than just a place to buy stamps or collect social welfare payments. The post office is a lifeline, it is a hub of the community and a place where people have a chance to meet their neighbours and keep in contact. Taking away a post office simply tears the heart out of a community”, Ted Tynan said.

“It is no secret”, said the Workers’ Party councillor Tynan, “that An Post is being eyed by the private sector who want to take over its more profitable services and don’t give a damn about what happens local communities. To bring someone whose bottom line is profit in to advise on the future of post offices is tantamount to allowing the privateer vultures to set the agenda”.

“Both rural and urban areas have seen key services wrenched away and soon there will be no services of any kind. Mayfield has already lost its banks, and as we know Bus Éireann is under very serious threat. All of this is being done on purely economic, hard nosed business reasoning without a thought for the effect it will have on those who depend on these services”

“All of this amounts to criminal neglect and deliberate destruction of services by the present Fine Gael led government. Everything is for sale and what can’t be sold is expendable to them. People don’t matter any more to them”