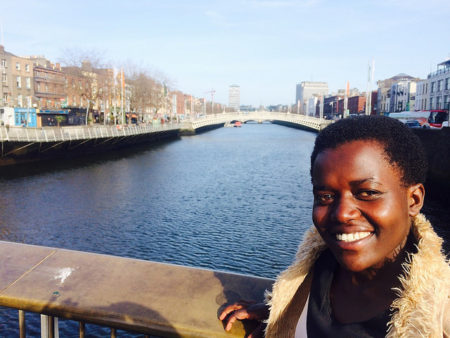 13 years after featuring on the Trócaire box, Josiane leaves Rwanda for the first time and visits Ireland to thank people for their support

Trócaire’s 2004 Lenten campaign focused on Rwanda and highlighted the situation in the country a decade after the genocide of 1994.

Josiane Umumarashavu, 26 years old and from Rwanda, featured on over one million Trócaire boxes that were displayed in homes in Cork and right across Ireland in 2004. Josiane left Rwanda for the first time this month to visit Ireland.

Josiane’s father, sister and two of her brothers were killed during the genocide. Her mother and two brothers survived but were struggling to make ends meet, living off a small piece of land and constantly facing the threat of hunger. The generosity of Trócaire supporters in Cork helped to provide families such as Josiane’s with the farming equipment they needed to improve their food production.

In 2015, Josiane graduated from university and now works for Trócaire in Rwanda. Her visit to Ireland highlights Trócaire’s Lent 2017 campaign and the importance of its continued work in the poorest communities in the world.

Josiane described how the 2004 Trócaire Lent campaign changed her life: “When I was a child we struggled to find enough to eat and we faced hunger. Thanks to Trócaire supporters, families like mine were provided with the different farming equipment we needed to grow more food. The support from the people in Ireland continued to help me and my family long after that campaign had finished. Life is definitely better now. We have a home, a piece of land, cows and goats. Because of this support I was able to finish my schooling.”

“I still have a copy of the photograph of me skipping and the Trócaire box in my home,” she said. “It makes me very happy to look at it and to think that people in Ireland saw my photo and thought about life in Rwanda. It was amazing to think that people from a different country were interested in my family. I am so happy to be in Ireland to say thank you to people in Cork and I’m very happy to be now part of the Trócaire team making changes in people’s lives in Rwanda.”