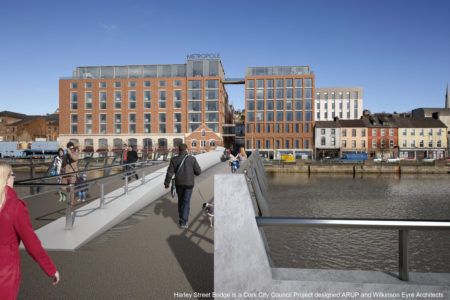 Plans for a €50 million investment in the Metropole Hotel by Trigon Hotels Limited – the owners of the Metropole Hotel, Cork International Hotel and Cork Airport Hotel – represent a unique development opportunity, signaling a renaissance in Cork city’s historic Victorian Quarter.

Trigon Hotels Limited will shortly submit a planning application to Cork City Council for the iconic project which will include the sensitive refurbishment and expansion of the Metropole hotel, together with the construction of a new, contemporary urban hotel called ‘The M’, which will be built on an adjacent site near Harley Street.

The two hotels will be linked by a glass balustrade bridge across Harley Street, with an enclosed bridge at first floor level, linking ‘The M’ hotel to the Metropole Hotel providing easy access for guests to all hotel facilities. The overall development will deliver more than 400 hotel bedrooms in the heart of the historic Victorian Quarter, in addition to a double basement car park in the Metropole Hotel. Trigon Hotels Limited has a strong track record in Cork, as the successful operator of three significant hotel properties.

Vincent O’Farrell, Director, Trigon Hotels Limited, announced the company’s exciting investment plans. “This year marks the 120thanniversary of the iconic Metropole Hotel so it’s fitting that our extensive refurbishment plans for the ‘Grand Dame’ of Cork’s hotel market will see the property sensitively and lovingly restored to her former glory, or her return to greatness!

“In addition to our extensive refurbishment and expansion plans for the Metropole Hotel, we also have plans to build a new, contemporary urban hotel on an adjacent site near Harley Street, called ‘The M’. This property will be a brand new hotel concept for Cork featuring a relaxation collision space, where all the front of house hotel activity happens in the same zone, a living room for the Cork city experience, if you like. If asked to compare the two properties, I would describe the Metropole Hotel as a glass of champagne, while ‘The M’ is an Espresso Martini!” said Mr. O’Farrell.

Aaron Mansworth, Group General Manager & Director, Trigon Hotels Limited, said the investment plans represent a significant tourism opportunity for the city. “This is a wonderful opportunity to move forward with exciting renewal plans for MacCurtain Street and the historic Victorian Quarter. The proposed restoration and expansion of the Metropole Hotel, in addition to the development of ‘The M’ hotel, will create significant local employment, bringing additional tourists and visitors to the area which is critical to the future economic prosperity of our city.”

The standout feature of the refurbished Metropole hotel will be a uniquely-designed Winter Garden in the heart of the development, which takes its inspiration from the original architecture of the late 19th century and is based on the concept of a central double-height glazed glass atrium. The Winter Garden will be flooded with natural light and will feature an interior courtyard-style restaurant, delivering a bustling, social meeting space in the heart of the city.

The Metropole refurbishment will deliver three boutique retail units, a seventh-floor penthouse, an elevated rooftop bar, upgraded spa facilities and function rooms, an additional 140 new bedrooms and 43 bedroom suites and meeting rooms, completing the up-scale offering on the north side of the River Lee.

Once fully occupied, the total number of employees in the hotel and retail units is estimated at 200 people. The construction phase is expected to take approximately three years to complete, during which up to 300 people will be employed.

The overall Metropole expansion project comprises more than 22,800m2 across two blocks around Harley Street, complementing Cork City Council’s plans to link MacCurtain Street to the new Harley Street pedestrian bridge, due for completion in 2019. The bridge will provide a vital link from the Victorian Quarter to the St. Patrick’s Street retail core, through the centre of the proposed Metropole Hotel development. This marks a unique opportunity to develop a new, vibrant urban space in heart of the city in terms of vitality, activity and connectivity which will benefit generations of Corkonians and visitors alike.

Plans for the Metropole expansion project have been in development for the past 12 months, involving extensive consultation with city planners. A world-class, Cork-based project team has been working on the development, led by Seán Kearns and his team at Reddy Architecture & Urbanism and including specialist conservation architects, Jack Coughlan Architects, structural and services engineers, JODA  Engineering Consultants, cost consultants, Michael Barrett & Partners, planning consultants, Cunnane Stratton Reynolds and economic consultants, DKM.