The centenary of Terence MacSwiney’s marriage to Muriel Murphy in a small English village on June 9, 1917 is being marked with the public display for the first time of a magnificent wedding gift to the couple.

The silver dish ring made by famous Cork silversmiths William Egan & Sons (see photos attached to press release) was a present to Terence and Muriel from the girls of St Íta’s School, founded nine months earlier in Cork by the groom’s sisters, Mary and Annie MacSwiney.   It is now on permanent display at Independence Museum Kilmurry, where it is just one of many items in a special collection which remembers the life and death of Terence MacSwiney.

Terence’s sisters were among the very small wedding party at the ceremony, which took place in St Joseph’s Church in Bromyard, Herefordshire. It took place on the day after the 25th birthday of Muriel, a member of the wealthy Cork distilling family, who did not fully approve of the wedding. 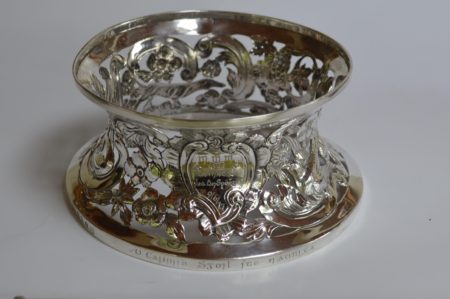 MacSwiney had been forced to live in, and remain within a few miles’ radius, of the English village since late February 1917. He had been deported by the British authorities for his continuing Irish Volunteers activities, along with others, including Cork’s future first Republican Lord Mayor, Tomás MacCurtain. The best man was Richard Mulcahy, who would become Irish Volunteers Chief of Staff in 1918, and later commander-in-chief of the National Army after Michael Collins was killed in August 1922 at Béal na Bláth, a few miles from Independence Museum Kilmurry.    The wedding was conducted in Irish by the Capuchin friar, Fr Augustine Hayden, who  ministered to the wounded and dying during the Easter Rising in Dublin the previous year, and was with Con Colbert in the hours before his execution in May 1916.

Terence MacSwiney died on hunger strike in Brixton Prison in London, on October 25, 1920. He had been arrested in August 1920 at Cork City Hall, having become Lord Mayor after the murder of his friend Tomás MacCurtain by police in March 1920.  But MacSwiney was also the first member of Dáil Éireann to represent the Mid-Cork constituency, where the museum is located in the village of Kilmurry, just off the Cork-Macroom road at Lissarda.

“This is a wonderful addition to the collection in our museum, which places a strong emphasis on increasing awareness and appreciation of Terence MacSwiney’s life  – not just as a political and  military figure, but as a writer and a family man.    It also further strengthens ties between the museum and our parish with the MacSwiney family, whose support we have been very grateful for over many decades.”

Terence’s father John and his ancestors were natives of the Kilmurry parish. Terence was instrumental in organising Irish Volunteers companies in Kilmurry, and elsewhere in Mid-Cork, from 1915 onward. His director of elections for the December 1918 general election was Kilmurry man, John T Murphy. The Mid-Cork constituency was uncontested in the end and MacSwiney, imprisoned in Lincoln jail, was one of many Sinn Féin candidates to be deemed elected while in an English prison. Like all other successful Sinn Féin candidates, he did not take his seat in Westminster and instead became one of the first members of Dáil Éireann.

Terence and Muriel’s only child Máire MacSwiney Brugha (born in 1918, and later to marry the son of Terence’s friend Cathal Brugha) was KHAA’s patron until her death in 2012.  She opened the original museum in 1965 in a small premises in Kilmurry, where the collection was housed until it moved to a new purpose-designed building that was officially opened in August 2016 by President Michael D Higgins.

The museum’s MacSwiney collection include many of his personal items, such as copies of his own and other authors’ books, and family photographs. Artefacts associated with his hunger strike and death include  a wheel from the hearse which carried his coffin from the funeral at Cork city’s North Cathedral to the Republican plot at St Finbarr’s Cemetery.

Independence Museum Kilmurry houses a unique collection of artefacts, photos and document of local and national significance, with an emphasis on local connections to events of the Irish revolution a century ago.  From the Easter Rising, through the War of Independence and Civil War, people in Kilmurry and the surrounding areas were participants in, and witnesses to, many major episodes. The museum displays items directly connected with the nearby ambushes at Kilmichael – where 17 RIC Auxiliary police were killed by the IRA’s West Cork Brigade Flying Column, led by Tom Barry, on November 28, 1920 – and Béal na Bláth, where Michael Collins died on August 22, 1922.