This is the first time the Munster Fleadh has been held in a city. The Fleadh is taking place from July 18th to 23rd, so there is still time to catch some of the acts.

Things to see and do

Today, Friday, the dancing competitions commence in the Everyman with the Sean Nós finals in the Cork School of Music at 6.30pm. Scoil Fonn agus Amhrán, for qualifiers from the County Fleadhanna, takes place in the School of Music all day Friday. Connie O’Connell is giving a full day workshop that day also in the Cork School of Music on playing slides and polkas. Also on Friday a Street Entertainment competition will be held on Oliver Plunkett Street and entertainment on the Gig Rig will be non-stop from 6.00pm to 9.00pm on the Grand Parade.

All Ireland Champions the Shandrum Céilí Band play a free concert and a CD launch in the Oliver Plunkett and the Singers Club in the Spailpín Fánach at 9.00pm.

On Saturday 22nd the music, singing and comhrá competitions commence at 10.00am with the Céilí Bands and Grupa Cheoil in the City Hall and the Cork School of Music and College of Commerce the venues for the solo, duets and trios. Dance competitions continue all day in the Everyman. The Gig Rig from 3.00 to 9.00pm and the Singers Club in the Spailpin Fánach from 9.00pm. Ionad na Gaeilge in the CSM both Saturday Saturday and Sunday. The Fleadh Céilí Mór takes place in the St Finbarr’s GAA on the Saturday night with the Shandrum Céili Band.

On Sunday morning Aifreann traidisiúnta will be at 10.00am in St Peter & Paul’s Church with the competitions continuing throughout the day. Ger Murphy and Ken Cotter play on the Gig Rig for the open air Céilí on the Grand Parade from 3.00pm to 6.00pm followed by entertainment until 9.00pm. 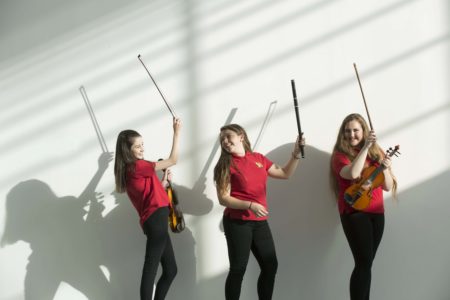 Maeve Moran of Douglas, Katie O’Driscoll of Blackrock, and Niamh Barrett of Douglas at the opening of the Munster Fleadh.
Picture Clare Keogh 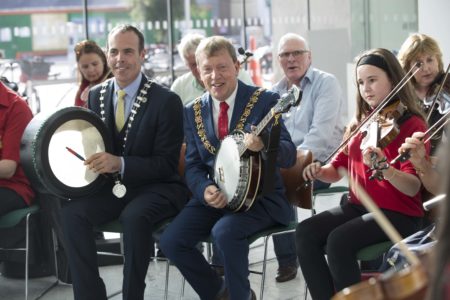 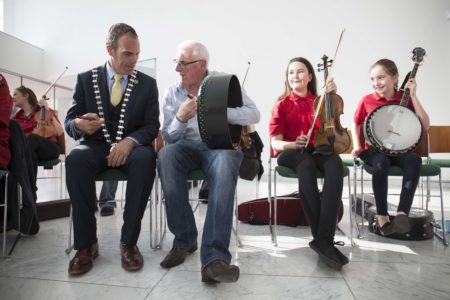