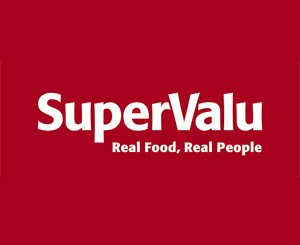 Scally’s SuperValu in Clonakilty has scooped the prestigious award for ‘Most Creative Retailer’ in Ireland at the annual Checkout ‘Best in Fresh’ awards. This award acknowledges Scally’s SuperValu in their ongoing commitment to delivering an unrivalled fresh offering at great value prices, while striving to support Irish suppliers.

Some of the biggest names in Irish grocery descended on The Shelbourne Hotel for the 2017 Checkout Best in Fresh Awards, the only annual event to acknowledge excellence in fresh produce retailing. Some of Ireland’s most innovative multiples, independent stores, forecourts, deli’s and specialist outlets competed for the awards.

More than 200 retailers were present at this year’s event to celebrate outstanding industry achievements in the areas of fruit and veg offerings, fresh meat and fish, food-to-go and the myriad of other categories that comprise a winning fresh offering.

Presenting the award, Editor of Checkout Magazine, Jenny Whelan said: Innovation and Scally’s go hand in hand, and every time you pay a visit to this store there seems to be an impressive new addition…. whether it be the gluten-free bakery, new savoury snack bar, or the ‘spice souk’ concept, which makes it easy for customers to try out new flavours. Consistently it’s one of Ireland’s best stores.”

Whelan went on to say, “The stores that we acknowledge at the Checkout Best In Fresh Awards can truly be called the real leaders in Ireland when it comes to fresh product retailing.” 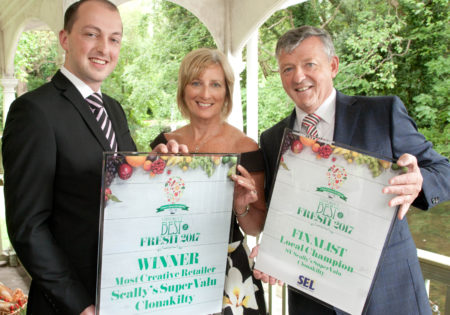 Scally’s SuperValu winners of the ‘Most Creative Retailer’ at Checkout ‘Best in Fresh’ Awards. Pictured are Eoghan Scally, Caitriona Scally and Eugene Scally

Commenting on the awards, Eugene Scally of Scally’s SuperValu said “We are extremely proud to have won this prestigious Checkout award for ‘Most Creative Retailer’. This is a real endorsement of the work we do on a daily basis, to ensure that our customers receive the best range and choice of fresh produce, in the best environment and at the best value.”

Commenting on the awards, Martin Kelleher, Managing Director, SuperValu, said, “At SuperValu we pride ourselves on our commitment to fresh food, bringing the best of Irish produce to consumers with a tailored, local offer in every store. The ‘Best in Fresh’ awards celebrate the very best in Irish grocery retailing, and we are delighted to take home twelve out of twenty-five ‘Best in Fresh’ awards this year. They are an acknowledgement of our ongoing commitment to delivering an unrivalled fresh food range at great value prices while continuing to support Irish suppliers.”

SuperValu sources from over 2,200 Irish suppliers – more than any other grocery retailer in the Irish market – equating to an annual economic contribution of €2.19 billion. Together with its retail partners, SuperValu employs approximately 14,500 colleagues, making it one of the State’s largest private sector employers. 75% of everything on SuperValu’s shelves is sourced in Ireland. SuperValu continues to source locally wherever possible which helps to sustain 30,000 jobs in the Irish economy.