Cork Puppetry Festival Attempt to Break the Record for the Most People Wearing Sock Puppets Ever!

Organised by Dowtcha Puppets, the 4th Cork Puppetry Festival, Ireland’s Leading Puppet Festival will take place from today – July 30th – to August 7th and will present a fantastic programme of puppet shows, including companies from Greece, Iceland, Germany and the UK, as well as showcasing the best of Cork, and Irish, puppetry.

The Cork Puppetry Festival will open on July 30th in Bishop Lucey Park with much loved Punch and Judy Puppet Shows and sock and puppet making workshops. Seven days later the festival will culminate in a world record attempt in Fitzgerald’s Park on August 7 to break the record for the Most People Wearing Sock Puppets. The World Record will take place as part of the Puppets Picnic where Puppets will roam around Fitzgerald’s Park and the Dowtcha Youth Ensemble will perform The Boy with No Story.

Children will be mesmerised as fairy stories and folklore are brought to life by puppets. Troll re-imagines Iceland’s favourite folk tales through the eyes of a young girl and her unusual friend from the mountains. A little bit folk tale, a little bit ghost story, Troll is an unmissable experience for all the family. 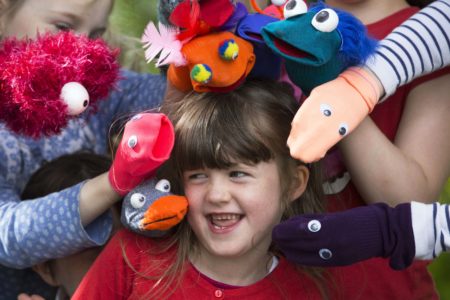 Róisín Hartnett and sock puppets in training to break the World Record for the most people wearing sock puppets which takes place on August 7th in Fitzgeralds Park as part of the Cork Puppetry Festival, organised by Dowtcha Puppets. The Cork Puppetry Festival runs from July 30th to August 7th and will showcase a fantastic programme of International and Irish Puppet Shows and Puppet Making Workshops for children and adults. Picture Clare Keogh

Presented by the Banyan Theatre Company (Northern Ireland) the much-loved classic The Emperor’s New Clothes will be told through the use of puppetry, original music and storytelling. The Puppet Circus comes to Cork with The DaSilva Marionette Circus Show (United Kingdom) where puppets will perform aerial acrobatics on the flying trapeze and participate in spectacular cycling stunts.

The Cork Puppetry Festival showcases the best of Irish Puppetry for children.  Join Outside the Box Circus in their three-legged house for an amazing mix of aerial circus and puppetry.

Your Man’s Puppets will present The Salmon of Wisdom which tells the story of young Fionn, a boy left on his own who meets Aoife and Grainne, the Makers of Warriors in the ancient forest.

A must for smaller children is the performance by Little Gem Puppets of Maggie which is loosely based on the story of Hansel and Gretel. Humble Bee Puppets present Jackie and the Potato Plant, a fun-filled retelling of Jack and the Beanstalk while the History of Tom Thumb (Banyan Theatre Company) is a comic interpretation of the traditional tale told through puppetry, storytelling and music. Carol Walsh in collaboration with Púca Puppets will present Bloom “N” Buzz, an interactive theatrical experience also for young children.

The Cork Puppetry Festival is not just a festival for children and this year features some fantastic adult puppet shows from award winning international Puppet Companies.

Presented by the German Company Merlin Puppet Theatre, Clowns Houses is a black comedy with detailed puppets and scenery which reflects on modern living in its current form. Based on the sixties horror films, the Greek Puppet Show She shoulda said No! is a classic thriller combining drama and comedy with a fairytale touch. The show features beautiful 2 D puppets and award-winning music by Yiorgos Kaloudis.

Don’t miss the Puppet Cabaret, a collection of puppetry shorts for adults in the relaxed atmosphere of the Village Hall. The cabaret brings together puppeteers from Ireland and abroad to perform an eclectic set of ten minutes acts.

For the first time The UNIMA Research Commission in collaboration with Cork Puppetry Festival, UCC and Mary Immaculate College will host a 2-day symposium which will explore the ways puppets interact with disability and health.

The Festival Club will be shared between the Village Hall 10am-6pm where you can meet for coffee, book tickets or participate in puppet making and Sin É in the evening.

Indoor performances will take place at the Granary Theatre and the Village Hall.

Tickets for all performances are available on www.corkpuppetryfestival.com  and on 087 3530420.