2016, a centenary year in the county of Cork, was a yearlong undertaking by Cork County Council and the people of County Cork, in commemorating the defining year of 1916, reflecting on the past one hundred years, and looking to the future of Ireland with pride.

Over 500 events and projects took place throughout Cork County, constituting well over 10% of all that was happening on both a national and international context. These events were organised by over 200 community groups with Cork County Council’s executive also playing a major role, supported by the Council’s All Party 1916 Centenary Commemoration Committee.

From ceremonies to re-enactment marches, time-capsules to performances, the Centenary Year in Cork will be one to live long in memory and this publication serves as a reminder of this wonderful centenary year in the County of Cork. 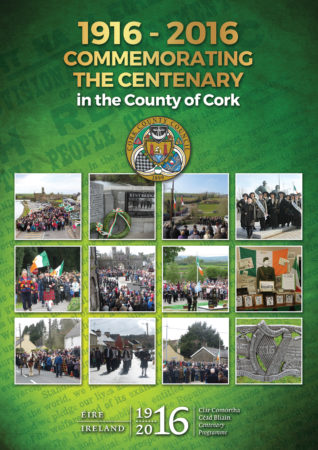 Speaking at the launch today, Mayor of the County of Cork, Cllr. Declan Hurley praised the publication that encapsulates in the one source, the vast range of events, projects and undertakings that took place in 2016 for the Centenary Commemoration of 1916 in the County of Cork. The publication, a compendium as such, documents the approach taken in commemorating the year including photographs and descriptions of the hundreds of events that took place right throughout the County.

“Organised by over 200 different community groups and organisations over 500 events took place in 2016; a truly outstanding measure of the County’s pride and passion for those who have gone before us”, noted the Mayor. In commemorating the centenary of 1916, the Mayor added “We have honoured those men and women of 1916 through creativity, through reflection, through ceremonies and most importantly, through community participation. This publication shines a light on the pride that the County of Cork has for its Irish heritage”. mayor

Reflecting on the year, Chief Executive of Cork County Council Tim Lucey noted, “From the on-set Cork County Council, through its executive and its 1916 Centenary Commemorative Committee, went about ensuring that the centenary year would be at the heart of every community, deserving of full local engagement and involvement. This and more was achieved in 2016, thanks to the enthusiasm and commitment shown by the people of County Cork”.

The Chair of Cork County Council’s 1916 Centenary Commemorative Committee Cllr. Frank O’Flynn furthered, “2016 is a year that we as Corkonians can be proud of. We have a tremendous love of our past in the County of Cork, and this will come to the fore yet again in the coming years as we commemorate the important role played by Cork and Corkonians in the War of Independence and Civil War”.

The publication, ‘1916-2016 Commemorating the Centenary in the County of Cork’, is available for purchase in a number of local outlets throughout the County including Liam Ruiséals in Cork City, Philip’s Bookshop in Mallow, Fitzgerald’s Bookshop in Macroom and Bandon Books in the Bandon Shopping Centre. A number of other outlets will be stocking the book in the coming days and it will also be available to purchase online via www.corkcoco.ie/arts-heritage.