Skype clinics will be made available to even more people in one of Ireland’s most geographically challenging constituencies, a Fine Gael Minister has said.

After experiencing a surge in demand for clinics since he became a Minister, Cork South West TD Jim Daly recently began hosting supplementary Skype clinics from his Dublin office to keep up with demand.

And thanks to their popularity, the out-of-hours online meetings will now be rolled out to constituents up to 100km away from his Bandon base.

Minister Daly said: “Thanks to the popularity of the Skype clinics I began in recent weeks, I now intend to extend the Skype clinics to further reaching places like Castletownbere which is 100 kilometres from where my constituency office is in Bandon.

“One of my staff members will go out with the laptop for Monday, Tuesday and Wednesday evenings when I’m in Dublin.

“I’ve carried out over a couple dozen Skype clinics now and they’re very helpful for people.

“Since I took up my post as a Minister in the Department of Health, the demand for clinics has quadrupled.

“There was such huge demand that it was leading to delays, long queues and time pressure, so we were looking for an alternative way to facilitate people and alleviate the pressure on the traditional clinics.

“I began by making phone calls to people, but I think people prefer to speak to you face to face. So I said I would try Skype and see if it went well, and we’ve been very pleasantly surprised.” 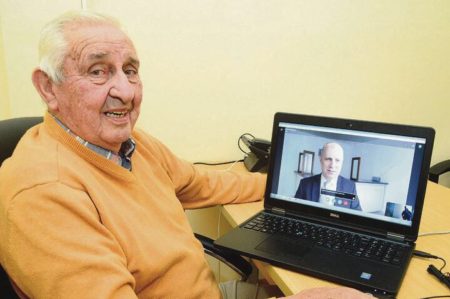 Minister Daly continued: “When people phone in to know when my clinics are, they’re given the times of my clinics which more often than not are during the working day- so a lot of people can’t make them.

“…the 7pm time slot in the evening suits a lot more people. Nobody has expressed any reservation or any hesitance with this method.

“I’ve been taking calls from my Dublin office after the Fine Gael parliamentary party meetings on Wednesday evenings, it’s just part of my routine now, and I look forward to expanding the service further.”

Minister Daly continued: “The biggest benefits are in terms of easing volume- we had very long delays and lengthy queues with people coming in for clinics on Mondays in the constituency offices, and we have cut the waiting times for those.

“It is also facilitating people who are working during the day and ordinarily wouldn’t get to speak to me, so we’re reaching a new audience.

“Thankfully I have very accommodating staff in Bandon who are willing to work late to facilitate the Skype calls.

“They set up the computer so the constituent doesn’t even need to know how to do it, they just have to call into the office and they’ll be put through.

“These Skype clinics are in addition to my weekly constituency clinics in Skibbereen, Clonakilty, and Bandon, and then I do monthly clinics the first Friday of every month.

“They’re there to compliment them, not replace them,” Minister Daly said.