Cork East Fine Gael TD and Minister of State at the Department of Justice, David Stanton, has visited Gaelscoil Mhainistir na Corann and Midleton Educate Together, both of which are new builds. 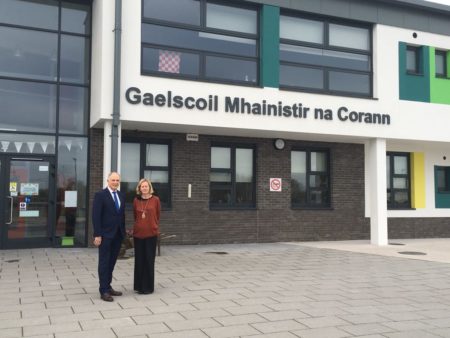 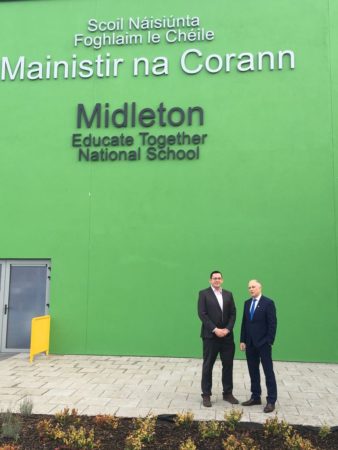 “I was pleased to have the opportunity to visit these two new schools. Gaelscoil Mhainistir na Corann and Midleton Educate Together 24 classroom primary schools with very modern facilities and will allow for the schools to accommodate increased enrolment into the future. Given the development planned for the wider Midleton area in the coming years, I am sure that demand for spaces will continue to grow”, noted Minister Stanton.

“Gaelscoil Mhainistir na Corann moved to its new premises in August 2016 having spent many years operating from the Community Centre. The school has been hugely successful and continues to expand year on year. I would like to thank Principal Mairead Uí Fhloinn for her warm welcome and for the opportunity to speak to pupil in Rang Sé about my work as a TD and as Minister of State. I was very impressed with their knowledge and questions.

“These new schools form part of a larger school building and modernisation programme being carried out by the Government and made possible through capital funding by the Department of Education and Skills. However, the contribution of Principals and staff of these two schools for managing such large building projects should also be acknowledged. As should that of parents and pupils as their support has also been vital to the success of both schools should also be acknowledged. I hope that all benefit from their new premises and I wish them every success into the future.