The redevelopment of Páirc Uí Chaoimh has been voted national ‘Engineering Project of the Year’ for 2017, it has been announced.

The regeneration of the stadium, home of Cork City and County GAA activities since it was established in 1898, has resulted in a multi-purpose floodlit bowl-shaped venue that can accommodate a capacity of 45,300 and up to 47,000 for games and concerts respectively, including 21,300 seats.

It also includes a second 4G playing pitch and multi-purpose usage of space to cater for different activities on match and non-match days to support income generation. Pairc Uí Chaoimh is now the first stadium in Ireland within a municipal park, the Marina Park. 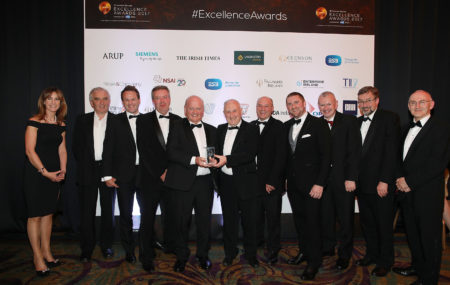 The project, supported by Cork County GAA Board and Cork City Council, was undertaken by Malachy Walsh and Partners and won out in the flagship category of the eighth annual Engineers Ireland Excellence Awards, held in association with ESB, at a ceremony in the InterContinental Hotel in Dublin. The ‘Engineering Project of the Year’ category is sponsored by Transport Infrastructure Ireland and is voted for by a panel of judges and the public.

Speaking about the development, Seamus Kelly Managing Director, Malachy Walsh and Partners, said: “Pairc Uí Chaoimh is a long-established sports ground with a unique heritage, but by 2013 it was clear it required extensive redevelopment if it was to continue as a venue for major games and concerts. The work we have undertaken with our partners over the last few years has been a huge endeavour, but one that has culminated in a modern facility that has the capacity to host multiple forms of revenue-generating activities to support the region. Now an impressive state-of-the-art facility situated on the banks of the River Lee, it is set to provide a wonderful player and spectator experience for many years to come and we are thrilled to have the project recognised by the public and the Engineers Ireland judges.”

The Cork Institute of Technology Department of Mechanical, Biomedical & Manufacturing Engineering and Department of Management & Enterprise were runner-up in the ‘Engineering Education Award’ category for work relating to the development of new laboratories for innovation and multidisciplinary product development.

Additionally, Cork City Council’s Fabric Upgrade Program came runner-up in the ‘Local Authority Engineering Initiative Award’ category for its ambitious targets to improve the energy efficiency of existing housing stock and to ensure that all new builds are designed and built to the Near Zero Energy Building standard.

All the category winners were announced at a special awards ceremony in the InterContinental Hotel in Dublin.

Pat O’Doherty, ESB Chief Executive, said: “It is vital Ireland has a ready supply of engineering skills to support vital infrastructural development across areas such as transport, education, sports, health, water, energy and the digital economy amongst others. That’s why the continuing promotion of engineering as a career choice is fundamental to meeting Ireland’s long-term needs as an economy and society. This year’s awards showcase projects and initiatives that exhibit great expertise in a diversity of areas and represent the ingenuity and vibrancy that is the hallmark of modern Irish engineering – and I applaud them all.”

Speaking at the awards, Caroline Spillane, Engineers Ireland Director General, said: “This year’s awards once again showcase and celebrate the invaluable contribution the engineering profession makes to society. Engineering is at the heart of community and culture in Ireland and, on behalf of Engineers Ireland, I offer congratulations to each winner and shortlisted entrant. The projects involved all highlight the innovation and quality of work that is continuously produced by Irish engineers both at home and abroad.”