LEGO League finals to be held in Cork

Ten secondary schools from across the county will compete to represent Cork in the Irish and British Finals in the UK next February.

The First LEGO League Finals, organised by Learn It, will be hosted at UCC’s Devere Hall from 9am to 2:30pm on Saturday December 1st. The teams from Cork schools begin the day with the judging of project presentations, robot design and team interviews before moving on to the robot challenge at 12 noon. 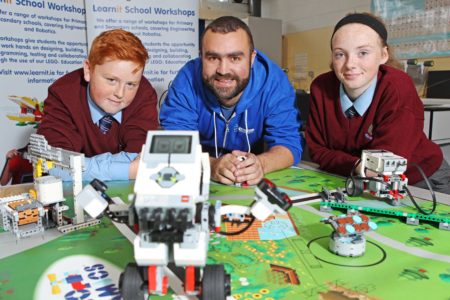 Kyle Connolly and Sophie Mulligan from Mayfield Community School with Learn It Director Ross Maguire as they prepare for Ireland’s FIRST® LEGO® League Challenge. Teams of first and second years across Munster and Leinster are now invited to enter this global science and technology challenge which is being rolled out in Ireland by LearnIt.

The FIRST® LEGO® League is a collaboration between Learn it, Qualcomm, UCC School of Engineering and Cork Education Support Centre and directly supported by Science Foundation Ireland under the SFI Discover Programme.

Learn it, the only official providers of LEGO education school workshops, teacher training and camps in Ireland, have provided all the equipment and support for the FIRST® LEGO® League which will grow to 24 schools from Cork for 2018.

Schools in this year’s finals for Cork region include: