Kevin ‘Boxer’ Moran, T.D., Minister of State with responsibility for the Office of Public Works and Flood Relief has today signed contracts with Ward and Burke Construction Ltd for the construction of the Clonakilty Flood Relief Scheme. The Minister spoke with the Media in O’Donovan’s Hotel, Clonakilty,

Speaking of the contract signing, Mayor of the County of Cork, Cllr Declan Hurley noted the importance of this for the people of Clonakilty, “The effects of flooding are horrendous. Unfortunately Clonakilty is familiar with these effects. Today is a significant milestone for Clonakilty town and marks the advancement of the Flood Relief Scheme into Stage 4 Construction with the contractor due to commence shortly. Today brings confidence to Clonakilty.”

This substantial construction project, valued at over €10 million will deliver flood risk alleviation measures for the town of Clonakilty and its environs. The works include the construction of an uplands storage area and flood defences in the form of earthen flood embankments, reinforced concrete walls, sheetpiled walls, stormwater pumping stations and other ancillary drainage works. 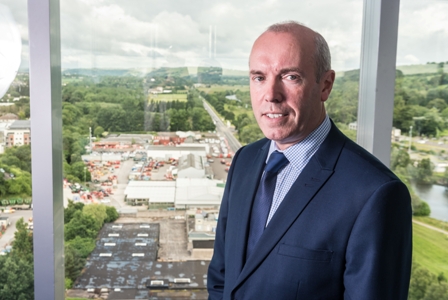 Chief Executive of Cork County Council, Tim Lucey also noted the significance of these works, “The Clonakilty Flood Relief Scheme has evolved through an initial screening process on a range of measures typically considered for flood alleviation schemes, the development of potential options and finally the development of a preferred scheme design. When completed, the Clonakilty Flood Relief Scheme will provide protection to 150 residential and 146 non-residential properties from the severe flooding experienced in the past.”

Minister Moran also noted the importance of Flood Risk Management for this Government. “This investment in Clonakilty forms part of the Government’s National Development Plan 2018-2027 which will involve €1 billion in initiatives to protect threatened localities from river and coastal flood risk over the next ten years. I am delighted that the Clonakilty Flood Relief Scheme is now proceeding to construction and will add to the record number of thirty four flood relief schemes that are currently underway throughout the country protecting individuals, families, communities and businesses against the most serious risk and impact of flooding.”