Half-Light Post Production, on the Marina, has unveiled recent development works which were carried out in order to cater for the studio’s continued growth and the demand for high end post production services for the film and television industry in Cork and further afield in Munster. In addition to the existing audio post production studio, Half-Light is now providing premium picture edit and colour grade facilities. 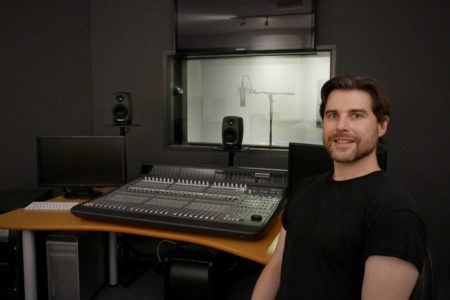 The company, which provides television and film producers with a full range of post production services, was first established in 2009 by Cork man Conor Barron, who holds an MA in Music Technology from the University of Limerick, and prior to establishing Half-Light was a sound and music production education specialist for Apple in Bristol, UK. New additions to the facility, located in Cork City’s Marina Commercial Park, include a Colour Grade Suite, Edit Suite, 5.1 Mix Room, ADR Studio, Voice Over Booth, and a sound proof and acoustically treated Green Screen Sound Booth for filming piece-to-camera with superior sound quality. The combination of these facilities make it the first “all in one” post production house in Munster.

Speaking about the development, Conor Barron stated, “It’s fantastic to see Half-Light grow, and as we near our 10th birthday, we are delighted to now offer a full range of production services, having spent the last 12 months on R&D to get it just right. Creating and developing a high end facility and service was extremely important when developing our studio, and we are really seeing the results of this with a high calibre of return clients.

“As well as that, it was important for us that those working in film and television in the region didn’t have to make the trek outside of Munster to avail of these types of post production services. We have so much talent in the film and television industry here in the south of the country and it’s a very exciting time for the sector.”

In this expansion phase of the business, Half-Light has received the support of Film in Cork, which provides production, location and training support services to those working in film, television, and animation in Cork. Speaking about Half-Light’s offering, Rossa Mullin of Film in Cork said “The development of Half-Light is a very positive addition to the film and television industry here in Cork. Having a purpose-built facility in the city will open many more opportunities to grow and develop Cork’s talent pool in the sector. Conor has created a fantastic new facility and we wish him every success as he expands the range of services at Half-Light.”

Half-Light’s team consists of some of the best and most experienced creative talent in the region, and works with clients on an international, national and local level including RTÉ, Marvel Television, Walt Disney Pictures, BBC One, BBC Earth, and Cork projects such as The Young Offenders.

WEST CORK: Baltimore RNLI called out to search for a missing swimmer
Previous Post
9% VAT rate must be retained
Next Post
Tweets by @TheCork_ie