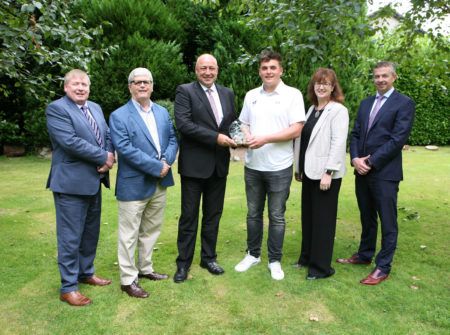 Mallow golfer James Sugrue, has joined the greats of golf, and has now been named Cork Person of the Month for October. James has also announced that he will turn Professional next June, after his involvement in the US Open (see his interview on the Cork Person of the Year Facebook).

Last June, the 22 year old Mallow native won gold at the 124th Amateur Championship, following in the footsteps of Cork great Jimmy Bruen, and so became only the fourth Irishman to win the Amateur Championship, with a nail-biting one-hole win over Scotland’s Euan Walker at Portmarnock. Other past Rep of Ireland winners were Bruen, Carr and McElhinney. As a result of this win James will play in three Majors over the next 10 months and all sorts of other exciting golfing opportunities are available to him. He played on the Walker Cup match last month, as part of the Great Britain and Ireland team against the U.S team.

A member of Mallow Golf Club, James Sugrue is now only the second Cork golfer to ever claim the overall amateur winner’s title, and the first Republic of Ireland player to win since 2005. With a crowd of over 3,000 people watching, many of whom were from the Mallow, Cork and Munster area, James secured his legacy at Portmarnock Golf Club on that special day last June.Successfully winning his last four holes, with a birdie on the 18th, Sugrue cemented his victory. Having already won competitions such as the 2017 South of Ireland, James’ list of achievements is becoming increasingly impressive over recent years.

On his recent accomplishments, James remarked, “It was unreal. It was great to see so many familiar faces all through that week. This year has been amazing, and the support from the local Mallow Golf Club and community as well as the greater Cork area has been incredible.” Next year James will play in the 2020 Masters and U.S. Open. He has already played in the Open in Portrush this year. “ I played a lot of my practice rounds with Shane Lowry, who won the tournament, so that was very special “ said James.

James appearing on the world stage, with the opportunity to play at Augusta, Georgia and Pebble Beach, New York,- something which many within the golfing community can only aspire to. Commenting on James’ success, Awards Organiser Manus O’Callaghan said, “James is a brilliant young player, with a bright future ahead of him. Everyone in Cork, and especially Mallow Golf Club, wishes him well in his Professional career in the years ahead.”

His name will now go forward for possible selection as Cork Person of the Year at a Gala Awards Lunch on Jan 17th next in Cork, before an invited audience of 250 people representing all sectors of Cork life.