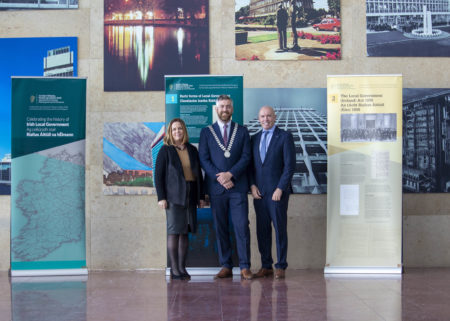 Cork County Council is hosting an exhibition celebrating 120 years of Irish Local Government in County Hall. The exhibition gives a fascinating breakdown of how Local Government has operated from its Anglo-Norman origins in the 12th Century to the major reforms in 2014.

2019 marks the 120th Anniversary of the first local elections following the enactment of the Local Government (Ireland) Act, 1898, which provided the legislative basis for much of the present local government system in Ireland. Here Cork County, this milestone is being recognised by Cork County Council through the hosting of an exhibition that celebrates the history of Irish Local Government.

The exhibition gives a fascinating breakdown of how Local Government has operated these past 120 years, from the Anglo-Norman origins of a structured form of local government in the 12th century, right up to the major reforms in 2014, which reduced the number of local authorities from 114 to 31, and the number of councillors from 1,627 to 949.

Speaking of the exhibition, the Mayor of the County of Cork Cllr. Christopher O’Sullivan, noted:
‘Cork County Council has a proud tradition in the provision of local services and this exhibition really highlights how local democracy has thrived on foot of the 1898 Local Government (Ireland Act) – an Act, that amongst many other things, allowed women to vote for the first time in this country. I would encourage people to visit the exhibition while on display.’

The exhibition focuses on some wonderful historic events in the history of local government and in particular the right for women to vote and run for election. Albina Broderick, or Gobnait Ní Bhruadair as she later preferred to be known, was the sister of the 1st Earl of Midleton in East Cork, John Broderick, and the exhibition provides information on her and other historic characters. Information is also given on the range of services that Local Authorities have provided in the past and still provide today, including, roads, housing, environment and planning services as well as more recent services such as cultural services including the Creative Ireland Initiative under the banner of serving Local Communities.