Winners of the 2019 National Project Awards include: Project Professional of the Year (sponsored by Aspira): Brian Cliffe — Cork Institute of Technology 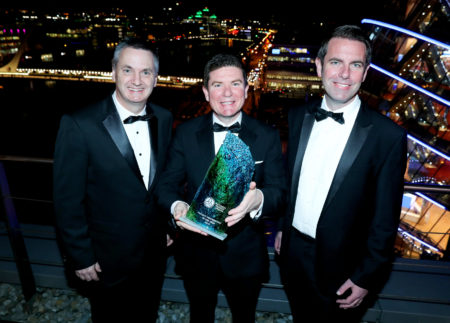 The expansion of Ireland’s state airports has been revealed as Ireland’s most influential project over the past 50 years at the Ireland Chapter of Project Management Institute’s (PMI) National Project Awards, held in partnership with PwC. Celebrating the 50th anniversary of PMI globally, the expansion of Cork, Dublin and Shannon Airports, which served almost 36 million passengers last year between them, scooped the special Jubilee Award following a joint public and jury vote. A further seven winners, all excelling within the project management discipline, were also revealed on the night, including Brian Cliffe, Project Management Course Coordinator at Cork Institute of Technology, who was named Project Professional of the Year. The judges acknowledged Brian for his commitment to the project management profession, applauding him for being a “leader and contributor”.

At the black-tie event at PwC, Spencer Dock, Dublin 1 on 14 November compered by Anton Savage, the Project Management Office (PMO) of the Year was awarded to Ervia / Ervia Business Services for their Standing on the Shoulders of Giants initiative that established Change & Transformation PMO capabilities.

Irish charity Wells for Zoë, which is dedicated to the provision of safe drinking water in northern Malawi, was named Social Good – Community Project of the Year and Business in the Community Ireland’s (BITCI) Low Carbon Pledge — the first dedicated pledge generated by Irish businesses to set industry standards on sustainability — scooped Social Good – Corporate Project of the Year.

Speaking on the winners, President of the Ireland Chapter of PMI Pat Lucey, stated: “From implementing new technology that builds a better health service to the recommissioning and qualifying of a full-scale manufacturing facility, the 2019 winners of the National Project Awards are hugely diverse but are linked through their exceptional use of project management to deliver complex projects.

“This year we celebrate the 50th anniversary of the PMI, who, for the past five decades have defined the project management discipline and, ultimately the profession through globally recognised standards, practices, communities and resources. The decision of the five founding members to establish the PMI 50 years ago has shaped the world as we know it and the winning projects are a reflection of what can be achieved when project management is effectively implemented. We are especially delighted to reveal Ireland’s Jubilee Project Award, with our State Airports a worthy winner for their vital role in keeping Ireland connected globally.”

Mr Lucey expressed his appreciation to the judging panel for their work in selecting the winners, and to Matheson, the independent verifier for the judging process. He added his sincere thanks to the National Project Awards’ sponsors — PwC, along with AIB, Aspira, CORA Systems, IPA, PMI.org and Teamwork.

Féilim Harvey, PwC Portfolio and Programme Management Leader, said: “PwC is delighted to again support the Ireland Chapter of PMI to host the 2019 National Project Awards celebrating project management excellence. This year, as ever, we have a superb shortlist of fantastic projects, all demonstrating top class project management. In particular, in the 50th year of the PMI, we have a very special Jubilee Award, showcasing the single key project that has made a real difference to people’s lives in Ireland in the last 50 years.

“Project management is central to Irish business success and our recent research shows that project managers will need to think beyond the traditional, look to innovation and new thinking to deliver sustainable projects into the future.

“PwC is very proud to be associated with these prestigious Awards. We congratulate all of the winners and those shortlisted for your tremendous achievements.”

Winners of the 2019 National Project Awards are