Cork County Council has marked the 50th anniversary of Ireland’s only cable car during a meeting of the West Cork Municipal District held at Lehanmore Community Centre and a visit to Dursey Island.

A key point along the Wild Atlantic Way, the Dursey Island cable car is located on the Beara Peninsula, West Cork and links the mainland with the scenic inhabited Dursey Island. The cable car has witnessed significant growth over the last number of years, increasing from 12,000 visitors in 2015 to 22,000 in 2018.

Officially opened on December 5th 1969 by the then Taoiseach Jack Lynch and managed since by Cork County Council, the cable car can carry 6 passengers per trip and was designed to allow islanders safer access to Dursey Island. The trip of 374 metres takes seven and a half minutes each way. 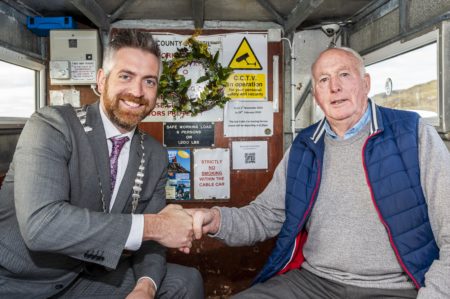 The Mayor of the County of Cork Cllr Christopher O’Sullivan was joined by a group of former and current operators, engineers, councillors, and the local community. Pictured is: The Mayor with Retired cable car operator Jimmy Murphy, in the cable car. Photographer: Andy Gibson 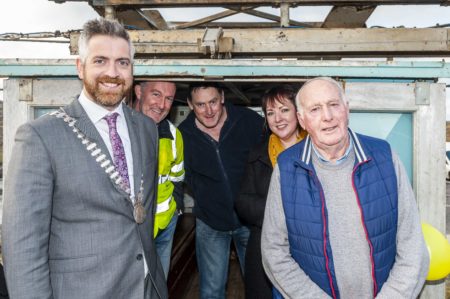 “The cable car is more than a means of transport, it has become a tourist attraction in and of itself on the Wild Atlantic Way. Tourism boosts the sustainability of scenic rural areas, because it creates employment for local people. We have seen how the Mizen Head signal station is accessible by the famous footbridge which features in so many photographs. In the same manner, travelling to Dursey Island involves the use of the famous cable car which is an integral part of the distinctive experience.”

Cork County Council has invested heavily in the maintenance of the existing system over the years, however as the cable car requires substantial investment, a new improved system is proposed. As part of an overall visitor project, Cork County Council has lodged plans with An Bord Pleanála for a new cable car system with a decision expected in Spring 2020.
The proposed development would have 2 independently operated cable cars with a Visitor/Interpretive Centre, Café and improved car parking on the mainland side. The Visitor/Interpretive Centre on the mainland would explain the history of the island with a particular emphasis on biodiversity. Meanwhile, on the island, there would be minimum development with a small building to receive the cable car along with a sheltered waiting area and toilets.

Estimated at a cost of €10.5 million with funding from Fáilte Ireland, the Dursey Island Project could be operational by early 2023.

While visitor numbers are projected to increase incrementally over a decade, the future operational plan for the cableway ensures a controlled and managed growth in visitor numbers to protect the ecology and habitats of the region with limits on the number of visitors per month.

“The development of the Dursey Cable Car and Visitor Centre project is warmly welcomed by both locals and tourists. The project will offer planned and controlled growth and would be a strong economic driver for both the area and the wider West Cork region but all the while protecting the ecology of this area which is what makes this place so unique.”