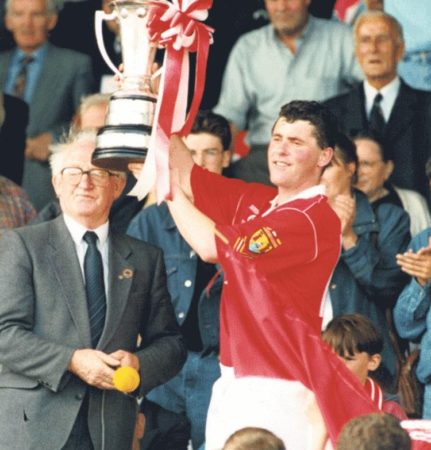 Cork South West Fine Gael T.D. and Minister of State at the Department of Health, Jim Daly, has confirmed that he has proposed that a life-size sculpture of the late Mick McCarthy be commissioned and erected in Skibbereen town.

Minister Daly confirmed he has written directly to the CEO of Cork County Council some months ago, proposing that a sculpture be erected to honour the late Mick McCarthy, “a true hero of Cork and Skibbereen GAA”.

Mr. Daly confirmed the Government has provided funding to commission a work of art as part of the Skibbereen Flood Relief Scheme. Further commenting, Minister Daly said he believed Mick’s legacy was most worthy of consideration.

In the letter to Cork County Council CEO Tim Lucey, Minister Daly proposed that, “a monument or sculpture be erected of the late Mick McCarthy to honour and remember the extraordinary dedication he gave to GAA in his home town of Skibbereen, and indeed his accomplishments also”.

Minister Daly wrote “Having won two senior All Ireland medals playing for Cork, and captaining his own local O’Donovan Rossa team to an All-Ireland club level victory, along with being the highest scorer ever in a club final, truly sets this man apart from the rest, and deems him worthy of consideration for a permanent monument to be erected to honour and remember his legacy.”

“Mick was a true gentleman and an inspiration to young people to follow in his footsteps to achieve great things by getting involved in sports,” the letter continued.

Mr. Daly concluded by saying, “I could not see a more fitting monument to be erected in Skibbereen. Indeed many still talk of the Mick’s great footballing talent and how the likes of him will never be seen again on a football field. This proposed statue would allow the conversation to continue for generations to come”.

He urged those who support the idea to express that support by emailing secretary.odonovanrossa@gmail.com and through social media sites.

AREA: WEST CORK, NEWS, SPORT
#WildAtlanticWay – 50th Anniversary of Ireland’s only cable car at Dursey Island
Previous Post
How to get the best offers from bookmakers