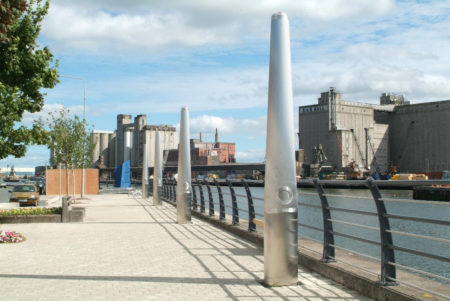 Cork City Council will write to the developers of offices and apartments being built near Penrose Quay seeking assistance to restore the “Listening Posts” art installation at the north docks. This call follows a request from Green Party councillor Oliver Moran.

At Monday’s evening meeting of the North East ward Local Area Committee, a city official said there was no budget allocated at present for the maintenance of public art by Cork City Council. The answer was in reply to a motion by independent councillor, Kieran McCarthy.

However, officials say there are plans to review the situation, identify other art installations that have been commissioned by Cork City Council, and assess the cost of general maintenance. The process will require a specialist contractor to undertake the study, which can then be considered in future budgets.

In the meantime, Green Party councillor Oliver Moran has proposed that the city council write to developers in the vicinity of the installation, asking for assistance in restoring the badly damaged art works:

“These are a unique monument to our city. They are the only sound installation in the city, and were created by renowned sculptor Daphne Wright, along with Johnny Hanrahan of the CIT School of Music and British sound designer, Dan Jones. They commemorate the immigrants who left Cork from these quays and tell their stories, good and bad, through their own voices.

“It’s an installation that’s very authentic to the area. It’s not every place that has an installation by artists the like of these. It would add a sense of place and value to properties being developed around them, as well being gift to the city to have them restored. Unfortunately, the work has been badly vandalised, but hopefully it’s salvageable.

“The new developments will help deter vandalism in future by bringing more footfall to the area. That could watch over the Listening Posts, and the memories of the people who were here before, in the way they deserve.”

What sounds are on the listening posts?

Daphne Wright and playwright Johnny Hanrahan were commissioned by Cork City Council to make a contemporary monument to those who emigrated from Cork over many decades on the famous Innisfallen Ferry. Working with composer Dan Jones they created a public sound installation, below is an adapted version released in June 2020 as part of an exhibition at Frith Street Gallery, London. It is reproduced here on TheCork.ie with the kind permission of Daphne Wright.