LIVE STREAM VIDEO: Ireland’s only “Town Mayor” will be installed this evening

Clonakilty, the only town now in the whole of Ireland to have a “Town Mayor”, will see the installation of the new First Citizen this evening at 8pm.

The present Deputy Mayor, Pádraig O’ Reilly, will be presented with the “trappings of office” by the outgoing Mayor Michael O’ Neill, Junior, thereby installing Pádraig as “Mayor of Clonakilty”, for the next 12 months.

Unfortunately, unlike every other year, where the changeover event was held at Asna Square in a public ceremony often attended by over 100 people, this years event has to take place in private due to the COVID-19 restrictions on public gatherings.

However, the public can still “attend”, as the ceremony – which will see the outgoing Mayor presenting his successor with the Robe of Office and the Mayoral Chain, will be streamed live at 8pm on the Clonakilty Mayoral Council Facebook page. 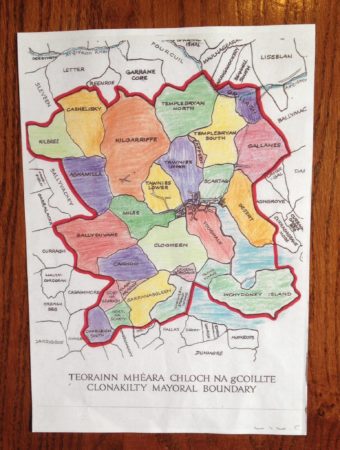 It’s likely that the outgoing First Citizen will give a speech outlining his year in office and the many community events he attended until the virus brought everything to an abrupt halt and his successor will outline his plans for the coming year.

Also on the evening, the incoming Deputy Mayor, Anthony McDermott will be formally installed, and the other two “Mayors in Waiting”, Paddy McCarthy and Christopher Hinchy will also be in attendance.

As locals will know, there was a Mayoral Election in May 2019 in which the five named above were elected directly by the people of the town and surrounding areas.

It’s a unique arrangement in Clonakilty, which started in 2014 when the statutory Town Council (UDC), was abolished by the then Government. The community was very annoyed by this, especially as the position of statutory Mayor would also be abolished which had existed for over 400 years.

Spearheaded by Dúchas Clonakilty Heritage, a campaign was launched in 2014 to hold a special election in which five people would be elected by the citizens of the area – each one to hold the title of Clonakilty Community Mayor for a year each.

It is unique in that it’s the only place in the 32 counties where the people decide who will be Mayor and it’s also a fact that Clonakilty is still the only Town with a Mayor as a result. (There are of course County and City Mayors which are political offices).

The Clon Mayors are all strictly non-party political, community-orientated and do not receive any wage or expenses whatsoever for their role. In short, it’s historic and a real pity that this year, the public cannot attend the changeover ceremony at Asna Square but the Clonakilty Mayoral Council extends a welcome to everyone to join in and watch the live broadcast of the ceremony on Facebook this Thursday evening 4th at 8pm.