The Everyman has announced it will re-open, and welcome theatregoers again, on September 15th following a six-month closure due to the Covid-19 public health restrictions issued by the government last March. 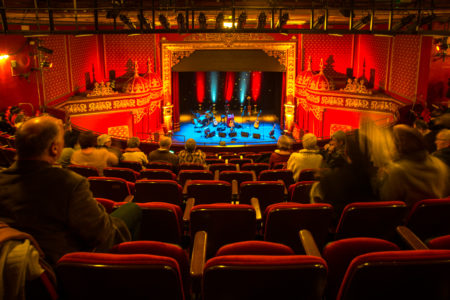 On March 12th, The Everyman closed its doors, cutting short a highly acclaimed run of Beckett’s Watt, performed by Barry McGovern and directed by Tom Creed. Since then, the auditorium has remained dark.

Although the recent update issued by the government has allowed theatres to re-open from June 29th, The Everyman will remain closed until it is ready to implement effective safety measures for audiences, artists, staff, and volunteers. Currently, The Everyman team is reviewing all work practices and procedures. As early as May, patrons were surveyed to understand their concerns about returning to the theatre, and these findings have influenced the work being done. A wonderful response from the survey has been the outpouring of concern, goodwill, and love from patrons for The Everyman and its programme. Many people are missing live performance and have said they cannot wait to return; the survey revealed that 84% of respondents would consider coming back to The Everyman when it opens again, once the theatre had the necessary social distancing and hygiene measures in place.

Programming will be impacted by the challenges presented by social distancing restrictions and restrictions on capacity – with the current social distancing of 2 metres the maximum capacity for the theatre’s auditorium is 85. Julie Kelleher, Artistic Director of The Everyman remains undaunted by the challenges ahead, “We are determined to bring our patrons a programme that celebrates live performance and exemplifies The Everyman values of maintaining tradition and breaking new ground.”

The theatre is using the current period to finish some very timely upgrades to the building, including a makeover to the public toilets, accomplished through historic grants from the Department of Culture, Heritage and the Gaeltacht and Cork City Council. This will effect an improved, safer, and more comfortable experience for all.

The COVID-19 public health emergency is a serious challenge for The Everyman, given that it generates 92% of its income from ticket sales which disappeared overnight in March. The theatre cancelled Sea Trilogy, a major opera production. Another, production, To the Lighthouse, will be staged in 2021. A production of The Lonesome West was due to be performed in April and it has also been postponed. Overall, 103 events have had to be postponed, rescheduled, or cancelled.

Sean Kelly, Executive Director of The Everyman remains optimistic and excited about The Everyman’s future. “Although the Everyman has faced grave challenges in recent months, we will soon re-open our doors for our audiences to enjoy great nights at this unique theatre. That we are able to do this is thanks to the support of our community and, of course, the resilience and ingenuity of our wonderful staff. Many things about our environment have changed but The Everyman’s commitment to serving its public has not and, together, we can look to the future with excitement and optimism.”