LONG READ: The #BookOfLismore has been donated to University College Cork 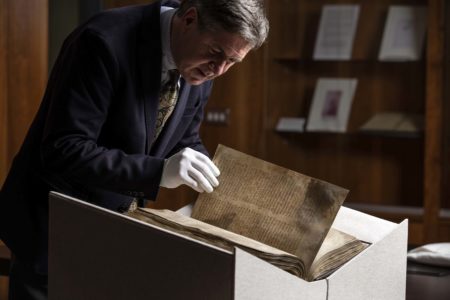 15th-century medieval manuscript donated to UCC by the Trustees of the Chatsworth Settlement, the book contains some of the greatest masterpieces of medieval Irish literature

The Book of Lismore, created in the late 15th century, has been donated by the Trustees of the Chatsworth Settlement to University College Cork (UCC). This major medieval manuscript, created at Kilbrittain, Co. Cork, in a golden age of Irish literature, is rightly considered as one of the Great Books of Ireland.

The Book of Lismore, consists of 198 large vellum folios, and contains important texts, many drawn from Irish tradition and others that are translations of contemporary European works. The Book reflects an Ireland that was deeply engaged with the contemporary European culture of the time.

The Book was compiled for Fínghin Mac Carthaigh, Lord of Carbery (1478–1505) and became known as Leabhar Mhic Cárthaigh Riabhaigh. The book begins with religious-themed material, mainly lives of the Irish saints and apocryphal tales associated with them, before passing on to material in translation: the History of the Lombards and the Conquests of Charlemagne.

The Book also contains the only surviving translation in Irish of the travels of Marco Polo, which adds to the exotic, outward-looking ambience of the manuscript. Marco Polo is followed by a collection of native, secular texts dealing with the theme of Kingship. The Book concludes with the exploits of the popular mythological hero Fionn mac Cumhaill and the Fianna, as told in the lengthy tale known as Agallamh na Seanórach.

Its contents are comprehensive in their representation of both religious and secular learning in the Irish language as preserved and promoted by the elite learned classes of late medieval Ireland. In its design and execution, and in its combination of native and European tradition, The Book of Lismore is a library of literature that makes a self-assured statement about aristocratic literary taste in autonomous Gaelic Ireland in the late 15th century.

UCC will welcome the book back to Cork with a special virtual event at 11am today (Wednesday 28th October) on the UCC website. The Book of Lismore will eventually be displayed in a Treasures Gallery that UCC plans to develop in its Boole Library. This publicly accessible gallery will display items from the University collections, serving as an attractive destination for visitors to the region. The Trustees of the Chatsworth Settlement and the Cavendish Family are supportive of this Treasures Gallery project and are keen to enable the University to achieve its aim to make important material such as The Book of Lismore accessible to the general public in an educational context. 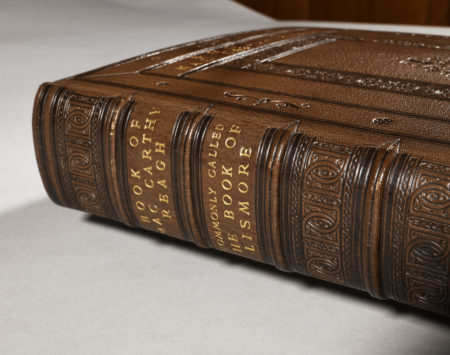 A unique and generous donation

The owners of this major medieval Irish manuscript, the Trustees of the Chatsworth Settlement, have made the very generous decision to donate The Book of Lismore to UCC in recognition of academic and curatorial expertise at the university, and in appreciation of a very long and fruitful partnership between the Cavendish Family and UCC.

The Duke of Devonshire stated “Ever since the Book of Lismore was loaned to University College Cork for an exhibition in 2011, we have been considering ways for it to return there permanently. My family and I are delighted this has been possible, and hope that it will benefit many generations of students, scholars and visitors to the university.” 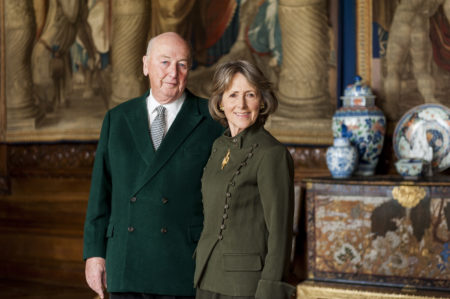 Successive UCC Presidents have maintained and enjoyed good relations with the successive Dukes of Devonshire, extending as far back as the establishment of the University in the 1840’s when the site for the new Queen’s College was chosen alongside lands then owned by the 6th Duke, and who’s successor, the 8th Duke later became a sponsor of the University Observatory and a significant donor to the University’s Model Farm School (Munster Institute).

The Interim President of UCC, Professor John O’Halloran stated “This is a very historic moment for University College Cork. The Book of Lismore is a vital symbol of our cultural heritage. The donation of the Book of Lismore to UCC Library emphasises the central connection between Cork and Gaelic learning through the ages. This extraordinary act of generosity by the Duke of Devonshire reaffirms the shared understanding between our respective countries and cultures, an understanding that is based on enlightenment, civility and common purpose.”

The Trustees of the Chatsworth Settlement would like to recognise the generous support of the Friends of the National Libraries (UK) in making the donation to UCC possible. The Book of Lismore will now form the foundation for the coordinated study of the Gaelic manuscript – text, script and structural components – in UCC at undergraduate and postgraduate levels.

A history that begins in the late 15th century

The history of The Book begins in the late 15th century, when it was compiled for its noble patrons, Fínghin Mac Carthaigh (McCarthy) Riabhach, and his wife, Caitilín. The writing took place probably at Kilbrittain Castle, home of Mac Carthaigh. It also has connections to the Franciscan house at nearby Timoleague, which was associated with the family of Mac Carthaigh Riabhach since its foundation.

The Book of Lismore has been in the possession of the Cavendish Family and their ancestors since the 1640s and kept at Lismore Castle, County Waterford, Ireland (1 hours drive from UCC), and in more recent times at Chatsworth House in Derbyshire, England.

The adventures of The Book are as note-worthy as its content. Evidence suggests that it was kept at Kilbrittain Castle in west Cork, the Mac Carthaigh Riabhach residence, until the early 1640s, when, after capture in a siege, it was given into the possession of the Earl of Cork at Lismore Castle. Walled up in the following century, possibly for safe-keeping, it was rediscovered, along with an 11th century crozier, during renovation work on Lismore Castle in 1814. Soon after it was lent to a Cork antiquary, Donnchadh Ó Floinn, and was transcribed by local scribes before being returned incomplete to Lismore. However, by the 1860s, The Book was restored to its present state and remained for the most part at Lismore until 1914. It was thereafter transferred to Devonshire House, London and from there to its present home at Chatsworth, in Derbyshire, ancestral seat of the Dukes of Devonshire. The manuscript has been the property of the Trustees of the Chatsworth Settlement since its establishment in 1946.

The manuscript’s owners have previously lent it for scholarly use since the 19th century, not only to Cork’s scribal circle, but to institutions such as the Royal Irish Academy, the British Museum, and to UCC where it was placed on public exhibition for the first time in 2011.

Ireland’s leading centre for the study of Gaelic Ireland

With over 200 Gaelic manuscripts in its collection, UCC is Ireland’s leading centre for the study of the materiality of the literary artefacts of Gaelic Ireland. The Book will now be the centerpiece of this large collection at UCC’s Library, and the donation of the manuscript to UCC marks a further stage in the commitment of the Cavendish Family to the scholarship of The Book of Lismore.

These Gaelic manuscripts already form the basis for extensive teaching and research, and The Book of Lismore, written on vellum and being at least 150 years older than any other manuscript volume in the collection, offers a rare field of study.

The spectroscopic study in UCC of vellums and inks in Irish manuscripts has recently received national recognition through a substantial Advanced Laureate award to Professor Pádraig Ó Macháin from the Irish Research Council. This is frontier research into which The Book of Lismore, with its vellum and Gaelic script, will fit perfectly as a research target, further enhancing the research infrastructure and output of Modern Irish studies in the University. At the levels of the undergraduate and postgraduate student, therefore, and at the level of the senior researcher, the donation of The Book of Lismore to UCC by Trustees of the Chatsworth Settlement is already revolutionising humanities research and teaching in the University.

Commenting Professor Pádraig Ó Macháin stated “Looking to the future, and anticipating the generations of students who will be introduced to The Book as a vital and visible part of their studies – be they linguistic, calligraphic, literary, historical, socio-political or other – the presence of The Book of Lismore in Cork, and its crucial part in the Gaelic heritage of Ireland, will be seen as a core contribution to the cultural and educational identity of UCC.”

The Book of Lismore encapsulates an important part of the cultural heritage of Cork, Munster and Ireland. Like other surviving manuscripts in Irish, it illustrates the multi-layered histories and traditions of our past.

The manuscript is also significant for its place in the Irish manuscript and scribal traditions. This unique book illustrates how an object can be subject to the cultural, social, and political interactions between two neighbouring countries, in this case, Ireland and Great Britain. 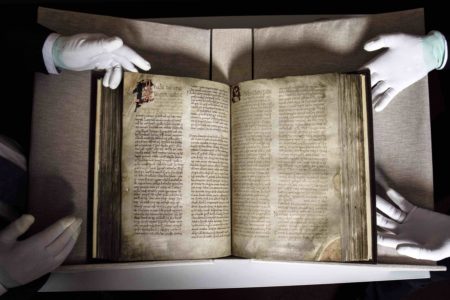 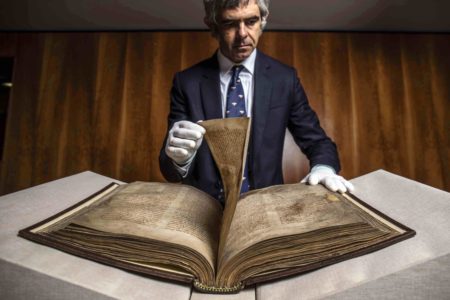 €80,000 for Cork projects which promote integration of immigrants
Previous Post
Ryanair cancel ALL flights from Cork Airport for a 4-week period from mid-Nov to mid-Dec
Next Post
Tweets by @TheCork_ie