During lockdown, the only way to travel is via Google Streetview. You can travel the world from the comfort of your armchair.

Recently I decided to check out where Father Ted’s House is. The exterior of which served as the ‘Parochial House’ in the hit TV series.

I was surprised to see it’s somewhat hidden. 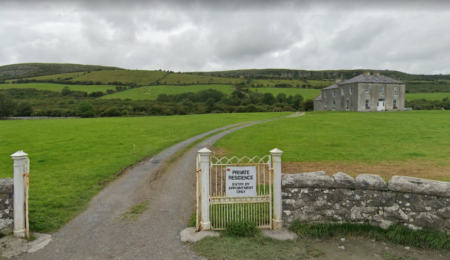 Note the sign on the gate: “Private Residence: Entry by appointment only”. The house isn’t a prop, it’s someone’s place of residence!

The owners of the house have the location hidden on Google business, meaning it shows up as a zone covering the entire Island of Ireland, rather than a pinpoint. 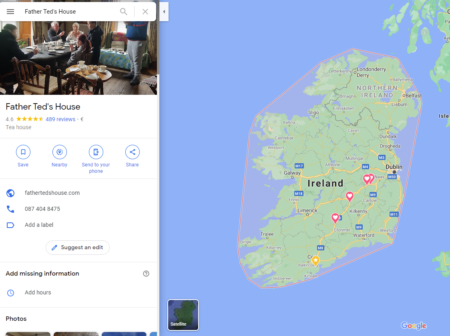 Similarly, on Google Maps there is no label (the red pin mark below was our temporary mark) 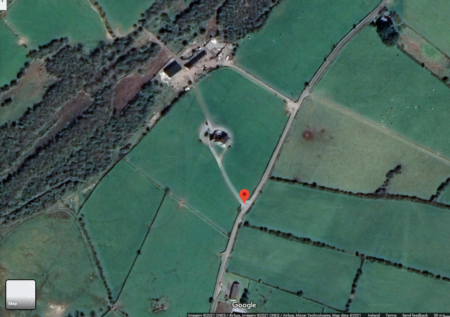 Here is the Google Streetview version which – at the time of writing – shoes not one but two cars outside. The owners of the house must be inundated with people taking selfies outside.

The house is actually known as Glanquinn, Kilnaboy, Co Clare, V95 VY2F. Prior to COVID19, the owners had a website at www.FatherTedsHouse.com, but the website is currently blank.

What is Father Ted?

Father Ted was a TV sitcom created by Irish writers Graham Linehan and Arthur Mathews and produced by British production company Hat Trick Productions for Channel 4. The show originally aired over three series from 1995 until 1998, including a Christmas special, for a total of 25 episodes. The show aired on RTÉ Two in Ireland, on Nine Network (series 1) and ABC Television (series 2 and 3) in Australia, and on TV3 in New Zealand.

Set on the fictional Craggy Island, a remote location off Ireland’s west coast, the show starred Dermot Morgan as the eponymous Father Ted Crilly, alongside fellow priests Father Dougal McGuire (Ardal O’Hanlon) and Father Jack Hackett (Frank Kelly). Exiled on the island for various past incidents, the priests live together in the parochial house with their housekeeper Mrs Doyle (Pauline McLynn). The show was critically acclaimed, receiving several BAFTA awards, and remains a popular sitcom in the UK and Ireland. In a 2001 poll by Channel 4, Dougal was ranked fifth on their list of the 100 Greatest TV Characters. In 2019, Father Ted was ranked second to Fawlty Towers in a list of “the greatest British sitcoms” compiled by a panel of comedy experts for the Radio Times.