The significant increase in people enjoying outdoor water-based activities such as kayaking, surfing, paddle-boarding and open water swimming is expected to continue to grow year on year, and not just during the summer months. This means all-weather changing facilities, secure storage and bathrooms at beaches and inland water spots will be in huge demand. 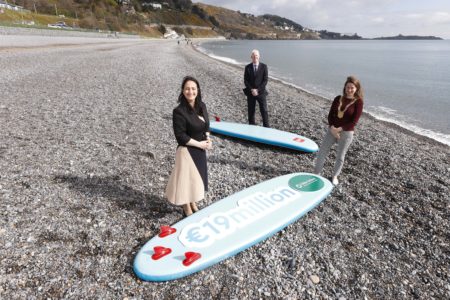 Minister for Tourism Catherine Martin TD (left), pictured at Killiney Beach, Dublin with Paul Kelly, CEO Fáilte Ireland and Cllr. Una Power, Cathaoirleach of Dun Laoghaire Rathdown County Council, for the announcement of Fáilte Ireland’s new €19 million investment to build public facility centres at beaches and inland water areas. Killiney Beach in Co. Dublin is one of 22 locations across the country that will be benefit. 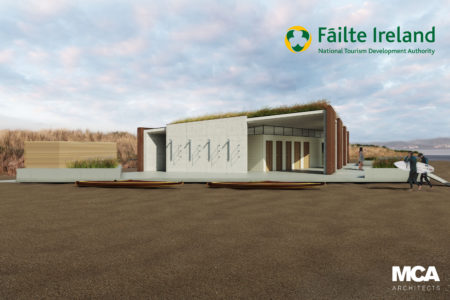 To meet this demand Minister for Tourism Catherine Martin and Fáilte Ireland are have announced major new investment worth €19million. The funding will be used to build world-class facility centres at 22 locations across the country where water-based activities are a key visitor attraction. (see full list in notes to editor).

In Cork, two locations at Claycastle, Youghal, and Garrylucas Beach, near Garrettstown, will be developed under this scheme, in partnership with Cork County Council. Each centre will provide hot shower, changing and toilet facilities, secure storage, induction spaces, equipment washdown and orientation points.

This investment scheme, developed in partnership between Fáilte Ireland and Local Authorities, will support the local economy and the outdoor activity sector by significantly enhancing the overall visitor experience, providing new business opportunities in local communities and allowing for the extension of the tourism season beyond the traditional summer months.

A second phase is expected to commence in 2023 under Fáilte Ireland’s Platforms for Growth capital investment programme.

“I wholeheartedly welcome Failte Ireland’s announcement that Cork County Council was successful in both of its applications under this initiative. As Ireland’s ‘Maritime Haven’, we are blessed with many natural assets, including the most spectacular coastline and some of Ireland’s finest beaches. There is a wide range of fantastic water activity businesses operating throughout the county and the provision of new modern facilities will greatly enhance the experience and usage of our beaches. The funding approval from Fáilte Ireland will also encourage the growth of water-based activities, enabling both Claycastle and Garrylucas beaches to be internationally recognised as best-in-class activity centres and sustainable tourism destinations. This represents an important opportunity for significant economic growth, with adventure tourism considered one of the fastest growing and most exciting sectors within the Irish tourism industry.”