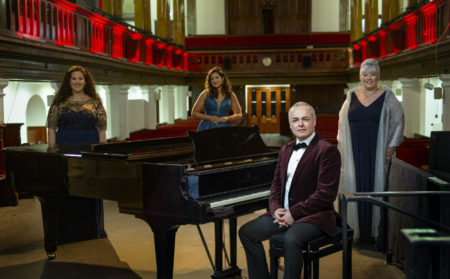 It marks the sixth and final concert of the programme which has seen a number of virtuoso performers bring their talents to the stages of Curtis Auditorium and Triskel Christchurch for streamed concerts during a time when the public has been unable to attend live performances due to restrictions.

Sopranos Cullagh, Nash and Lonergan will deliver solo performances as well as a number of duets and trios, singing pieces from popular operas such as Cosi Fan Tutte and The Mikado, classics from Bernstein, Sondheim and Gerswhin, and also more classical composers such as Sergei Rachmaninov.

Chairperson of Cork Orchestral Society, Tom Crowley, said: “DIVA – If it was sung by a diva, it has a home in this programme. I can’t think of a better way of bringing our concert series to a close than with this vibrant celebration of song. Wherever you are and whatever you’re doing, when you listen to this concert it’s guaranteed to put a smile on your face.

“Watching the recording process, I was mesmerised as Emma, Kelley, Majella and Michael seamlessly combined masterful interpretations with good craic. We’re so lucky to have talent like this in Cork.”

Majella Cullagh is well-known to Cork audiences for various show-stopping performances on Leeside over the years, while also enjoying a hugely successful international career that has seen her sing in productions across Europe and the US.

Emma Nash meanwhile has featured in a number of opera concert performances as part of the Cork Opera House Concert Series – she sang the role of Valencienne in The Merry Widow as well as Aninna and Flora in La Traviata in 2016. Emma performed The Mikado where she sang the role of Mimi. Emma also performed in all three instalments of The House Trilogy, a chamber opera series by Tom Lane. Most recently, Emma performed in A Diva’s Christmas alongside Majella Cullagh and Kelley Petcu.

Kelley Lonergan won the RDS Music Bursary in 2013 and was offered a solo engagement with the RTE National Symphony Orchestra as part of this prize (July 2014). She was also winner of the Mrs PJ Geoghegan Memorial Cup & Gus Smith Award, Cuisine de France Count John McCormack Vocal Bursary, and the Gervase Elwes Memorial Cup & Business Plus Bursary. The three sopranos will be accompanied by experienced and internationally renowned pianist, Michael Joyce.