Cork Airport has awarded the main construction contract for the rebuilding of the airport’s main runway to Colas Limited, part of the International Colas Group, a leader in the field in the design, maintenance and construction of transport infrastructure. Colas has extensive airport construction experience with similar runway reconstruction projects completed across the world. Colas has 6 offices in Ireland (4 ROI, 2 NI) with their Irish head office located in Maynooth, Co. Kildare. Minister of State Naughton visited the airport today to meet with MD Niall MacCarthy and Colas Ireland CEO Gearoid Lohan and confirmed the approval of €10m in Government funding towards this critically important project. 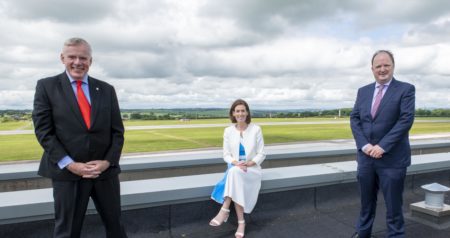 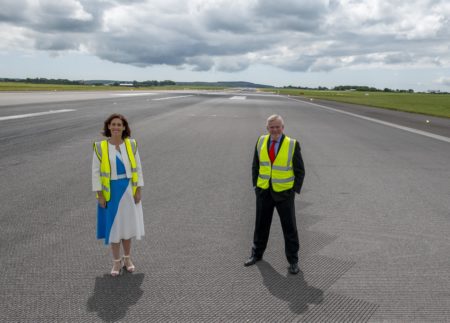 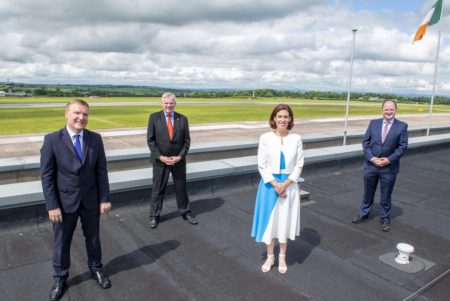 Around 250 construction and supply jobs will be created during the project, including several local specialist sub-contractor roles. Mobilisation and preparatory site works will begin at night immediately, without impacting the airport’s summer flight schedule. The main construction works will follow on a 24/7 basis over a 10-week period from September 13. Construction of the new runway will be completed by November 22 in advance of the busy Christmas travel period.

Over €40 million is being invested in Cork Airport between 2020-2022 to upgrade the critical infrastructure at the Airport of which the main runway reconstruction, a new Electrical Sub-Station and a new Hold Baggage Security screening system, constitute the major parts. Colas was awarded the contract following an extensive EU tender process. The project to reconstruct the main runway (16/34) is being supported by Government funding of €10 million from the Department of Transport, with the balance of the funding coming from Cork Airport’s parent company, daa plc, to complete the project.

Planning and design work for the reconstruction of the main runway started last year. Last Autumn, in light of the financial difficulties caused by COVID-19 and the strategic importance of the Cork Airport runway project to the entire Southern region, funding was sought from Government to proceed with the project. Cork Airport followed a comprehensive EU procurement process commencing last November leading to the award of the contract today following design completion.

The reconstruction of Cork Airport’s main runway will be the fastest large-scale construction project undertaken in the State in recent years – 12 months from funding approval to the completion of the main works – encompassing EU tendering, design, regulatory approvals and construction.
Minister Hildegarde Naughton, Minister of State at the Department of Transport said:
‘‘This will be the single biggest investment by any Government at Cork Airport and, when complete, it will serve as a key strategic asset for Cork and the entire region over the next 20 years.”

While acknowledging that the closure of the airport during construction may bring challenges for some, Minister Naughton added: ‘By closing the airport, this very significant project can be delivered in a quicker time, in a safer environment and with less long-term impacts on airlines and passengers. Following the 10-week closure period, the airport will be in a position to reopen in good time for Christmas and will enable the airport to operate in an unrestricted way in 2022.’

In conclusion, the Minister advised ‘Government policy on airports, like Cork, is to optimise conditions for regional development and connectivity – both for social and economic benefits. Government recognises that as employers, airports contribute to the local economy and employment is also supported through the various ancillary services that are provided to the airports. The funding, which has been made available to Cork Airport in 2021, is a clear indication of the importance that Government attaches to this airport and its capacity to weather the current crisis and to plan for recovery and growth into the future.”

Niall MacCarthy, Managing Director at Cork Airport said:
“We are delighted to award this significant runway reconstruction contract to Colas. This project forms part of a total investment and upgrade programme of €40 million between 2020 and 2022 so that the infrastructure at Cork Airport is positioned for recovery post-COVID-19. We are very grateful to the Irish Government for the significant financial support to get this project underway and completed.

The rebuilding of the main runway is the largest construction project to be undertaken at Cork Airport since the building of the new terminal 15 years ago. The construction programme includes a reconstruction of the main runway and the replacement of the airfield electrical systems, ducts and pits. These are all between 20 and 30 years old and the resulting electrical upgrade will reduce our runway electrical carbon footprint by 70%. These works are necessary to ensure that the main runway at Cork Airport continues to meet and exceed strict national and international regulations governing the operation and specification of runways at major airports and position us well for the future. With our physical infrastructure rebuilt, we are fully committed to rebuilding our business and connectivity and making Cork Airport once again the second largest airport in the State and connecting the South of Ireland with the world.”

Gearoid Lohan CEO Colas Ireland said:
“We are delighted to be awarded the contract for the reconstruction of such a prestigious and high profile piece of Ireland’s national infrastructure. Colas has been operating successfully in Ireland for many years and has significant experience of runway construction globally. We look forward to working closely with the team at Cork Airport to deliver this project. The project will support in excess of 250 local construction and supply chain jobs throughout Munster during its delivery.

The scale of the project, from start to finish cannot be underestimated involving detailed planning and logistics – 3,000 truckloads of asphalt, 500 maintenance hole pits to be built, 140 kilometres of electrical cable and 60 kilometres of cable duct and drains to be laid. This is a major project, which has a time-sensitive duration and is essential to the economy of the South of Ireland. We are fully committed to its successful delivery from immediate mobilisation through to the key 10-week main construction phase later this year.”

This runway at Cork Airport typically has more than 22,000 commercial aircraft movements annually and in addition, facilitates thousands of smaller aircraft using the country’s second-biggest airport each year.

Cork Airport had 2.6 million passengers in 2019, which was a rise of 8% on the previous year. This made it the Republic of Ireland’s second-largest airport and the fastest-growing airport on the island of Ireland.