Cork County Council signs up to the All-Ireland Pollinator Plan

Cork County Council has today formally signed up to the All-Ireland Pollinator Plan (AIPP). Getting on board with this ambitious five-year roadmap to help bees and nature is further evidence of the Council’s commitment to playing a leading role in making its land more pollinator friendly.

One-third of Ireland’s bee species are threatened with extinction because of a drastic reduction in the amount of flowers and safe nesting sites. Bumblebees, solitary bees, hoverflies and butterflies need sufficient supplies of food in the form of a range of flowering plants. They also need nesting places in long grass, burrows and crevices in wood or old walls.

The second All-Ireland Pollinator Plan was launched by the National Biodiversity Data Centre in March 2021 and centres around making farmland, public and private land pollinator friendly. Cork County Council has already developed seven Town Pollinator Plans and is in the process of preparing five more. 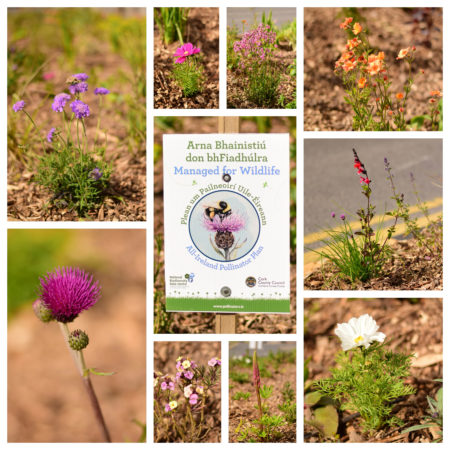 Mayor of the County of Cork, Cllr Gillian Coughlan said:

“Cork County Council plans to lead the way in making the island of Ireland a place where pollinators can flourish. We are already seeing positive results in towns across Cork County. In fact, the work undertaken in Midleton has been hailed as a national example of best practice. Flower beds are planted with pollinator friendly perennials and the spraying of pesticides has been reduced with road verges allowed to bloom into long flowering meadows. Success is not measured by having a plan, but by knowing that it is working and that is clear to see with the appearance of over 300 rare Bee Orchids last year. I am looking forward to working with local communities to replicate and extend the success of the Midleton project across the county.”

“The second All-Ireland Pollinator Plan contains actions which are simple, easily achieved and effective. Cork County Council has made great progress in this area and pollinators are better off than they were five years ago, but they are still in difficulties and as a society we all need to do more. The draft County Development Plan includes an objective to support the implementation of the AIPP. Town Pollinator Plans are now in place in Midleton, Carrigaline, Kinsale, Bantry, Macroom, Kanturk and Fermoy. Five more plans are being prepared and we will also be providing training and support to Local Authority staff, Tidy Towns and other community groups who are keen to develop similar plans for other towns and villages. Community Bee Workshops are being organised and a new roadside hedge-cutting policy is also being developed.”

The All-Ireland Pollinator Plan is voluntary. It was developed by a 16-member steering group who provide oversight, with implementation coordinated by the National Biodiversity Data Centre.