‘Would you like the opportunity to experience a piece of living history and have a holiday that will leave you with lasting memories? Staying at an Irish Landmark is not just a holiday. Your stay is contributing to the future of these wonderful buildings. We are so excited that this project is complete and is now available for people to enjoy’. 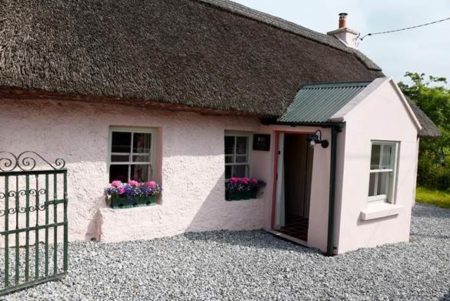 The Irish Landmark Trust is delighted to announce that restoration works at Killee Cottage, Mitchelstown, Co Cork are complete and bookings are open for this unique Thatched Cottage, which sleeps two guests.

The cottage likely dates from the early 19th century and possibly the late 18th century and is a good example of the vernacular farm cottage typical of the South of Ireland.

The property has been restored by the Irish Landmark Trust, having also seen the involvement/support of the Heritage Council and Cork County Council.

As part of the opening celebrations, the Irish Landmark Trust is offering a 10% discount for online booking at this link.

Once one of a number of cottages stretching along this quiet country lane, known locally as The Mall, Killee Cottage and its neighbour are now the only two thatched cottages remaining.  The boundary of this property ends at a small stream and there is a large garden with endless views stretching over the neighbouring fields.

The cottage is located in a landscape that has changed very little since the mid 19th century.  The buildings that appear on the 1st edition Ordnance Survey map are generally still in existence and there has been no excessive rural development since.

Killee Cottage appears on the 1st edition Ordnance Survey map (surveyed 1841-42) as one of a collection of three dwellings facing the public road with shared commonage to the rear.  The stream forms the East boundary.

The larger scale 1897 Ordnance Survey map has the same arrangement except that the middle dwelling has been lost and the land to the rear is divided between the two remaining dwellings.  The later map also shows the cottage having been extended to the west (outbuildings) and the enclosed yard to the front is also shown.

The cottage is likely to date from the early 19th century or may even be late 18th century.  It was probably built as a direct entry two room cottage and is a good example of the vernacular farm cottage typical of the South of Ireland.  As is often found in such houses, the room on the East side nearest the stream would have been the byre, with drainage directly to the stream.

The walls are constructed of local rubble stone and mud.  Externally the thickness of the walls allows for window seats to the cills which take advantage of the south-facing elevation.  The walls to the east end of the cottage nearest the stream are of a much later concrete construction.  The porch is also of relatively modern construction.

Originally Killee Cottage was probably a one or two roomed labourer’s dwelling that was tied to the Montgomery Estate (Field Marshall Montgomery’s family).  Later it was extended towards the river to provide a bedroom for the expanding family and farm economy as the cottage became linked to a small farm of approximately 12 acres.  The bedroom extension may have replaced the byre or may have been built to replace a previously existing room behind the current hearth.

Though the cottage now consists of a direct-entry plan, it may originally have been of a lobby-entry plan type with a room behind the main hearth.   This room was possibly removed to allow for the construction of the outbuildings.  If so, the recess to the left of the hearth was the entry from the main room to this additional room.

The remains of the early, battered, stone-built windbreak jambs either side of the front door inside the porch suggest that this was the main entrance from an early date, if not originally.  The battered walling at the two front windows may have been constructed as a built-in buttress as part of the original cottage as well.  This walling now forms two deep window seats to use to enjoy the sunshine.

When Irish Landmark took on the restoration of this cottage it looked very different from how it does today.  The most obvious change is the hearth.  The cupboards on either side of the hearth were removed along with the inserted 20th century fireplace enabling the hearth to be opened up to its original size.  Even the original bressumer beam was still in place supporting the opening.

The current kitchen/living room had been divided up to provide another bedroom with a bed loft above. This partition wall was removed to bring the room back to its original proportions.  There was evidence that there was originally a door in the back wall of the kitchen, but it had been partially blocked up and turned into a window.  This was opened up again to give access to the back garden.

The bathroom was originally a single bedroom and has been turned into a smart shower room.  The double bedroom was retained in its original location and repainted a similar deep pink colour.