What is Tanora? (and when will the bottlers “Estd. 1779” #TanoraGate be moved to a better location?)

‘Tanora – A Cork Legend’ that’s what the bottles used to say. This is a little story about the Cork Tangerine flavoured softdrink (don’t call it a red lemonade!) that has eluded mainstream success. Tanora is the Irn Bru or Inca Kola of Cork, it is a GeoFenced concoction that enjoys periods in the limelight, only to fade away again.

Tanora is sometimes categorised as a red lemonade but actually, it’s a tangerine flavoured carbonated drink sold only in Ireland, predominantly in Munster, enjoying its best sales in Cork. The formula was created in an era when the temperance movement was in full flow, and there was pressure on many mineral drinks (now know as soft drinks) manufacturers to create new flavours because the public was growing tired of plain lemonade and ginger ale. Tanora has a special place in the hearts of many Cork people, and is a ‘comfort food’ whose sales increase at Christmas for nostalgic reason.

Coca Cola Ireland’s current webpage for the drink states it was invented in the 1930s. However, our research in news archives reveals it was first mentioned on 10 July 1915 in the Cork Examiner Newspaper, where an advert read:

“Orange Beverage: Temperance parties have been for years expecting Mineral Water Manufacturers to produce at a popular price a palatable and refreshing drink that would replace Lemonade, and all other ades that people are tired of. After many experiments we have met that demand by the introduction of “TANORA,”a product of TANGERINE ORANGES, destined to be the popular temperance drink of the present generation. When the Public consider the health giving properties of Tangerine Oranges, they will appreciate our effort to supply a long felt want.”

Patents office records show that John Daly & Co registered Tanora as a trademark on 8 August 1928, this was to stop competitors from copying their popular product. At the time the company was worried about customers being given a substitute in many outlets, and even published an advert in the Cork Examiner on 7 June 1925 encouraging customers to check the label of what they were being served to ensure it was the genuine article! 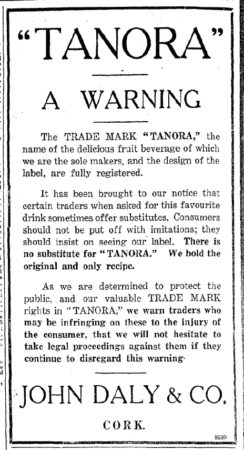 Tanora’s name came from the fact that it was made of Tangerines.  Tangerines are smaller and less rounded than common oranges. The taste is considered less sour, as well as sweeter and stronger than that of an orange.

What happened to John Daly & Co? 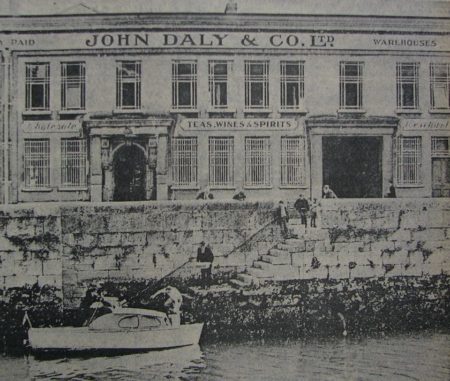 John Daly & Co occupied 17-20 Kyrls Quay, Cork City. The premises is now gone. From 1991-1993 the North Main Street Shopping Centre – which had an anchor tenant of Dunnes Stores – was built along with apartments which face the North Gate bridge.

One element from the Kyrls Quay building was saved. It was the archway that can be seen on the left of the photograph above. We must appreciate that back in 1991-3 public interest in heritage was not as strong as today. This may explain why the Archway was demoted to a back alley spot after the building was demolished. It is now sited at the rear of a Supermac’s, and apartment complex. It can be accessed by the public 24/7 because there is no gate. However, there is usually a wheelie bin juxtaposed. We hereby dub the edifice #TanoraGate in advance of its eventual removal from the shadows into a more prominent location befitting its ornate carvings! The Archway can just be seen in the Google Streetview image in the middle of the photograph. 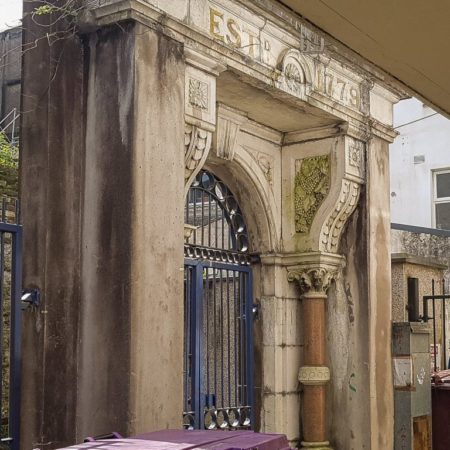 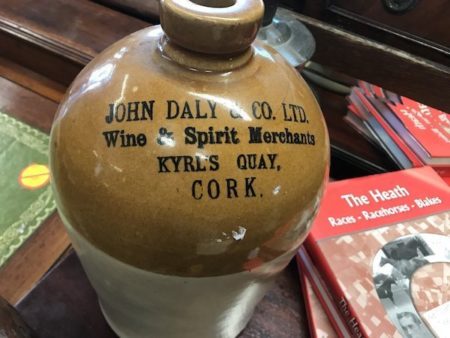 In recent years there were many calls for the Archway to be moved to a higher profile location in the City, as yet none have been successful.

In 1976 John Daly & Co moved operations from Kyrls Quay in the City Centre and to a larger flatter site on the Carrigrohane Road, near County Hall. This was widely known as the Coca Cola bottlers site. It closed in the past decade and remained flattened until recently when construction commenced on an apartment development.

Advertising has been sporadic for Tanora over the years. It has never been a mainstream softdrink. Check out this 1982 radio ad, complete with a period-appropriate jingle, which even concludes with a UK accented woman reading the strapline. Had this advert been made today it would surely have a John Spillane or Robert Heffernan style of Voiceover, because local accents are now in vogue for products whose key attribute is a local historic origin. 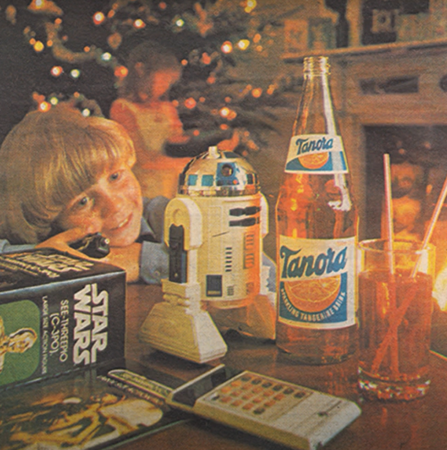 Tanora is packaged in 1.75l and 500ml plastic bottles. It was previously available in 330ml cans, but these ceased production in June 2010. Similarly, 200ml glass bottles for pubs are no longer produced due to lack of demand. In April 2011, Tanora was reformulated with a new taste including carrot and blackcurrant flavourings, and new packaging with the subtitle “A Cork legend” was introduced. The new flavour proved unpopular and was quickly later taken off the market and replaced with the old with an added label of “original formula” to reassure fans.

In January 2018, in the run-up to the May 2018 sugar tax, Tanora lost some of its sugar in favour of artificial sweeteners. A statement at the time from Coca Cola

“Tanora is a much-loved drink, in the Cork region especially, and we are grateful for the consumer loyalty it has enjoyed over the years. However, our consumers have told us that they want drinks with less sugar, and the recent changes made to Tanora are part of a wider sugar reduction programme across our full drinks portfolio. With our new recipe, we’ve been able to halve the sugar and calorie content, while maintaining the same great flavour that fans of the drink love. This new formula was developed in consultation with our local team in Cork, and we sought feedback from more than 1,500 retailers and consumers before moving to the new recipe. We’re pleased to report that reactions to date have been positive. We hope fans of the drink will continue to choose and enjoy Tanora – consuming less sugar and calories when they do so.”

At that time many soft drinks changed their formulas, including Lucozade and Ribena.Even if the taste is different from the original you can still buy Tanora. Right now you can pick up a 1.75l bottle in your local SuperValu for just €1.75. The current ingredients are listed as: Carbonated Water, Sugar, Tangerine Juice from Concentrate (2.6%), Acid (Citric Acid), Flavourings, Colour (Quinoline Yellow, Brown HT, Plain Caramel), Sweeteners (Sucralose, Acesulfame K), Preservatives (Potassium Sorbate, Sodium Benzoate). 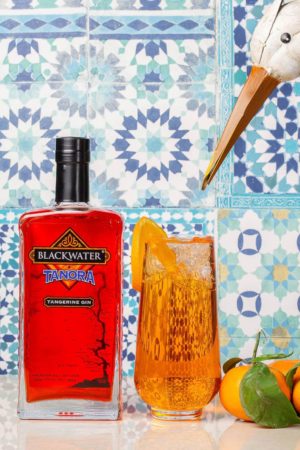 Considering that Tanora was made as an alternative to alcoholic drinks, it’s funny to think that you can currently buy a “Tanora Gin” which is made by the Blackwater Distillery of Waterford (Estd. 2014). The Distillery website reads:

“[We] have joined forces with a Cork’s favourite soft drink, Tanora to bring you this summers Tangerine dream. Tanora is a uniquely Irish soft drink. The brand’s heritage is rooted in Cork having been initially introduced to Cork City in the 1930s and it continues to be a much-loved drink across the Munster region. Blackwater Tanora, Irish Gin features a classic juniper profile, ginger and a whole metric-barn load of fresh tangerines to create a perfect Tanora inspired Gin. With 40% alcohol by volume, the gin is bottled in our classic 50cl clear square bottle, to showcase the distinctive tangerine liquid.”

Hopefully, Tanora – with or without alcohol – will remain available for many years to come.