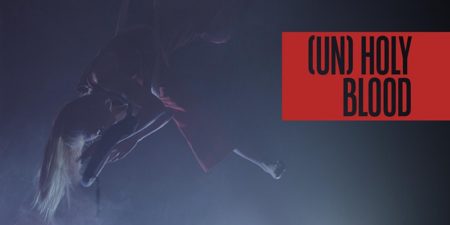 ‘The Circus Factory‘ describes itself as community-based circus training and creation space. Its goal is to “promote circus and street arts, and provide training opportunities for all ages and levels. It’s located at Centre Park House, Centre Park Road, near the Marina, Cork City

Promoters of a performance at the venue have been in touch with TheCork.ie to let us know that on 9pm, 24th and 25th of September there will be a premiere showing of a new work by Circus Factory professional member Lidija Sola. Being a premier we have not seen it (no one has!). Art, by its very nature is meant to push people beyond their comfort zone and make people think. There is a caveat that this is an 18+ event due to its content. According to their Eventbrite page “Developing part of this show was kindly supported by Art Council [sic], Cork City Council and Circus Factory Cork”

Title of performance: “The Feminist Temple Lead by A Priestess on Trapeze in Cork: Lidija Šola’s (Un)Holy Blood”

With acclaimed circus performer Lidija Šola at the helm, (Un)Holy Blood is described as a multimedia experience like no other. Produced by a group of aerial acrobats called Tricycle Trauma Collective, this “mould-shattering show fuses contemporary trapeze, abstract film and immersive soundscapes to explore and sanctify female plight and strength. Inspired by Alejandro Jodorowsky’s surrealist thriller Santa Sangre, this hair-raising spectacle is not for the faint-hearted. Inside its specially designed temple, Šola performs free falls from a height and tackles traumatic subjects like abortion and rape. Devised by a team of Cork-based talent, the production uses projectors, multiple screens and an arresting light design to deliver its impactful message.”

Plot:
Lirio is an unsanctified saint. After being dismembered and killed by two men, a pool of her holy blood springs from the ground and a church is built to protect it. Here, Lirio becomes a symbol of female suffering and perseverance. But what happens when this place of worship is bulldozed?

(Un)Holy Blood is an alternate reality where Lirio is given a voice, a temple and her arms back. She delivers a sermon where the circus is gospel, film is prayer and soundscapes are hymns. 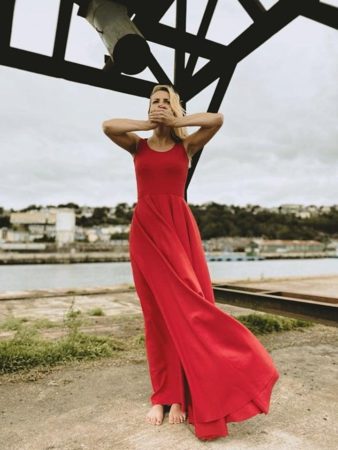 Lidija Sola is a contemporary circus artist and producer from Croatia, and based in Cork since 2019. Her artistic practice is based on the techniques and aesthetics of contemporary circus, experimental theatre, and extreme performance.

In 2012 she joined Triko Cirkus Teatar, where she taught aerial acrobatics and performed in contemporary circus plays: “Kaleidoscope”, “Snjezna Kraljica” and “Skupljacice tame”. From 2016 – 2018 she was performer and coordinator for the Croatian team at the largest African street festival in Nigeria – Calabar Carnival. In 2017, she co-founded the circus and performing arts development association– Tricycle Trauma, an experimental circus collective connected to independent, underground, and subversive art forms building the aesthetics of dark circus. As a part of the collective, she produced a considerable number of collaborative plays, performances, independent events, and hybrid-performing programmes across Croatia.

Some of the significant projects she has been working on are: contemporary circus play “Mala nocna mora”, project “Night of the Dark Circus” which gathers musicians and artists from the alternative scene and collaborations with DB Indos House of extreme musical theatre, F:I:L:M:S:K:A:T:E:K:A” and “Formed in a Stance”. After moving to Ireland in 2019 she joined Circus Factory as a member and continued to create her artistic work in Cork.

Caveat:
According to the promoters, the production is for an 18+ audience only because it features subject matter that some people may find distressing including “references to physical violence, rape, and abortion”.