Minister of State with responsibility for the Office of Public Works (OPW), Patrick O’Donovan, T.D., yesterday visited Bantry where he met with residents and business owners in the town and heard at first hand about the extent of the damage caused by flooding during Storm Barra last week. The Minister also discussed the Government’s plans for the Bantry Flood Relief Scheme with the Mayor of the County of Cork Cllr Gillian Coughlan, Senator Tim Lombard FG, Deputy Michael Collins IND, and Deputy Christopher O’Sullivan FF, Cork County Council officials and a councillors, along with OPW representatives. 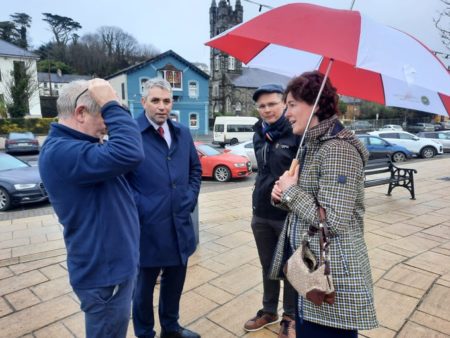 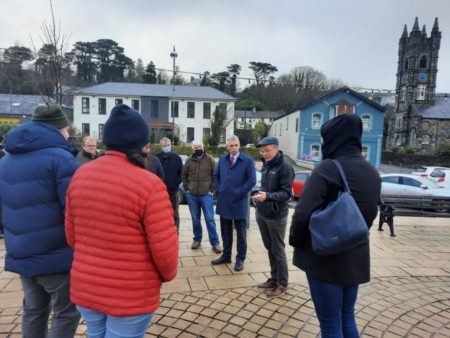 Minister O’Donovan said: “Having witnessed the damage caused by flooding in Bantry during August last year, I understand how devastating the recent damage caused by Storm Barra is for the local business owners and residents on the quay, along Wolfe Tone Square and New Street. I want again to praise all those who helped during this flood event. In particular, I would like to express my appreciation to Cork County Fire Services and all the staff of the Local Area Office of the Council who worked tirelessly and played such a significant role in managing this flood event from the weather and tidal warnings issued by Met Éireann and the OPW.”

The Minister continued: “In September, I announced funding totalling €140,000 was approved under the Office of Public Works’ Minor Flood Mitigation Works and Coastal Protection Scheme for Cork County Council to progress interim works which will mitigate future flooding events pending works on the culvert and the Bantry Flood Relief Scheme.”

The Minister concluded: “The OPW is working closely with Cork County Council, providing technical advice and funding to progress the design and construction of the Bantry Flood Relief Scheme to protect some 198 properties. The scheme will include both river and tidal defences. I believe Engineering and Environmental Consultants are expected to be appointed in the coming weeks so that the scheme design can commence in consultation with statutory and non-statutory bodies as well as the public.”

Minister O’Donovan highlighted how important it is that stakeholders take the opportunity to input into the scheme’s development. The Bantry Flood Relief Scheme is one of some 150 viable schemes that the Government has committed to funding through its €1.3 billion investment in flood risk management over the period of the National Development Plan to 2030.

My thanks to @podonovan for accepting my invitation to meet with @BantryBusiness today. A very informative meeting with @opwireland & @Corkcoco was also held. Design team for the Flood Relief Scheme to be appointed mid Jan. pic.twitter.com/5xEvZh0dez

Spent afternoon in #Bantry with @opwireland and @Corkcoco to receive report on #StormBarra and to get update on Flood Relief Scheme for the town pic.twitter.com/MdqKJijTGz