Energia is presenting Bantry Hospice Project, with a donation of €6,000 on behalf of the 2021 Ireland’s Most Christmassy Home champions, Sean and Noreen McSweeney, of Drimoleague, Co. Cork. The McSweeney’s were crowned champions following a public vote in December, which included competitors from Carlow, Dublin, Galway, Kildare and Wexford. As part of Energia’s annual competition to find the most festive decorations in Ireland, entrants were asked to nominate their charity of choice with the overall winner to receive €6,000.

Sean and Noreen McSweeney explained why they chose Bantry Hospice Project: “We see the tireless work of Bantry Hospice Project to ensure a high quality seven day a week palliative care service for the people of West Cork. We are delighted to be able to assist them in their efforts and to have the help of Energia in doing so.” 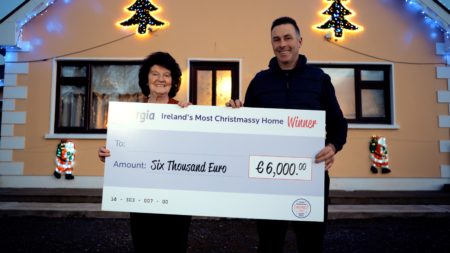 Damian Moloney from Bantry Hospice Project said: “We are delighted that Noreen and Sean McSweeney nominated Bantry Hospice project as their chosen charity. They have been putting on this wonderful display for many years and each year the display gets bigger and better. The Christmas display this year was their best yet and we are once again overwhelmed by their incredibly generosity.

“Bantry Hospice Project will use this donation to assist palliative care services in the West Cork area, working with the West Cork palliative care team and other service providers to make sure anyone dealing with palliative in the region care can be taken care of in the best way possible. Bantry Hospice Project also have a hardship fund to assist families in need on a case-by-case basis, this donation will also help us with that.”

Geoff Codd, Head of Energia Marketing and Retail Development commented: “Each year we eagerly await the beginning of our Ireland’s Most Christmassy Home competition as it provides us as it not only provides us with a chance to spread some festive cheer but also to support some extremely worthy causes around the country. We are delighted this year gave us the chance to donate to such deserving charities.”

2nd and 3rd place runners up will also receive donations of €4,000 and €2,000 respectively for their chosen charities with Tony Fitzpatrick from Wexford, choosing to donate to Wexford Hospice Homecare, while Christina and Philip Walker from Carlow selected Make-A-Wish to receive their €2,000 prize. This brings Energia’s total donations on behalf of winners over the past six years of the competition to find Ireland’s Most Christmassy Home up to €48,000.

AREA: WEST CORK, HEALTH, NEWS
How Statistics Help Business Owners Analyse Their Finances
Previous Post
From Cork to Sheffield, a look back at John Egan’s journey to the Steel City
Next Post
Tweets by @TheCork_ie