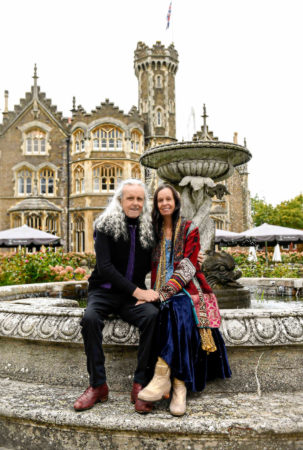 Donovan and Linda pictured here on the occasion of their Golden Wedding anniversary in 2020. Pic., by James Watkins:

International music icon, Donovan, and his wife, Linda Lawrence, will be presented with Honorary Corkperson awards at the annual Cork Person of the Year awards lunch on March 4th, 2022. Both have long been residents of North Cork, and this award also serves to mark their long-standing presence in the county.

Donovan Leitch rose to prominence on the international music scene in the mid-60’s from his home in Scotland with hit songs such as Catch the Wind, Sunshine Superman, Mellow Yellow, Universal Soldier, Colours, Hurdy Gurdy Man, and many more. At his induction into the Rock n’ Roll Hall of Fame in 2012 it was stated that, “Donovan singlehandedly initiated the Psychedelic Revolution with Sunshine Superman”, an album which he created at the age of 19. In May of last year, he released the song I Am The Shaman to mark his 75th birthday, the video for which was directed by the renowned American film director, David Lynch.

In 2012 and 2014, Donovan was inducted into the Rock n’ Roll Hall of Fame and into the Songwriters Hall of Fame, respectively. He has received numerous other awards over the years, including The Ivor Novello Award for Songwriting for his first song Catch the Wind, and Broadcast Music Inc.’s, Icon Award, for his “unique and indelible influence on generations of music makers.” Notably, this influence included The Beatles. Donovan is considered a significant influence on The Beatles’ music. Specifically on Sgt. Pepper’s Lonely Hearts Club Band, and on their ‘White’ album, after having become a tutor to them in India and having shown them many of his finger style techniques and unique descending chord patterns that became characteristic of many songs on the White album especially.

Donovan is credited with writing some of the first songs concerning climate change and a need for climate action. He and his wife, Linda, recently released an album entitled Eco-Song, which features 21 Songs about climate change, and is dedicated to the young climate activist, Greta Thunberg. In 1968, Donovan told us to listen to Mother Nature’s wake-up call through the lyrics of his song, ‘Atlantis’ – “wake-up, wake-up… as the elders of our time choose to remain blind” Very recently, inspired by young people’s climate marches, he wrote ‘Slow Down World’, an eco-themed opera for schools, which can be downloaded for free from his website.

Donovan’s work can also be found in many hit films and TV series such as Goodfellas and The Simpsons. He has composed scores for films such as Poor Cow, Brother Sun-Sister Moon, and The Pied Piper.

Linda Lawrence, a collage artist, works closely with her husband on his continuing music career, while also being active in fighting climate change, the creation of an animated children’s television series with an ecological theme for pre-teen, 8-12 year olds entitled ‘Tales of Aluna’, and the promotion of Transcendental Meditation. Married to Donovan for 52 years, she worked on the Eco-Song album over recent years, and dedicated it to Greta Thunberg and her followers. Her critically acclaimed book, ‘Luna Love’, a large format photographic memoir of her and her husband’s life, was released two years ago to mark her and Donovan’s 50th wedding anniversary. The book can be viewed by visiting LindaWeb.Me.

Awards founder and organiser of the Cork awards over the last 29 years, Manus O’Callaghan, said, “We are delighted that Donovan and Linda will join our Honorary Corkpersons Roll of Honour recipients – David and Patsy Puttnam (2012), Jeremy Irons (2013), Michael Flatley (2014), Joe Schmidt (2019) and John Bowman (2020)”

Donovan and Linda will receive engraved Cork Crystal and Republic of Cork Passports from the City and County Mayors on stage during the Person of Year lunch at the Rochestown Park Hotel.