Audivox is a Cork based, Irish owned and family run business with over 30 years’ experience in supplying hearing aids to the hearing impaired. With 19 clinics throughout Munster, Audivox is one of the most prominent hearing aid suppliers in Ireland.

Speaking at the launch, Garrett Fleming, Audivox Hearing owner said: “Audivox has been a supporter of the club for many years, and we are delighted to step up and become the back of shirt partner for next couple of years. As a local Cork company, it’s great to support a club which is also heavily embedded in its local community and we look forward to doing so for many years to come.

Commercial Manager, Paul Deasy added: “Garrett and all at Audivox have been great partners of the club for many years now. It is another partnership that has grown over the years and to now see them on the back of the shirt is fantastic. Audivox is another local company stepping up to support their local club and we would encourage our supporters to show them the same in return when possible. 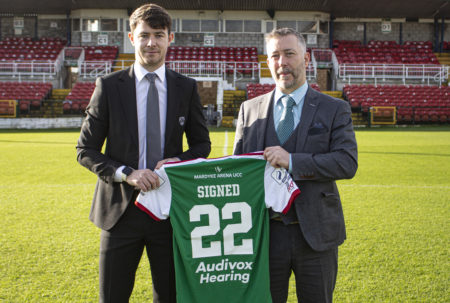