The death occurred of John A. Murphy yesterday 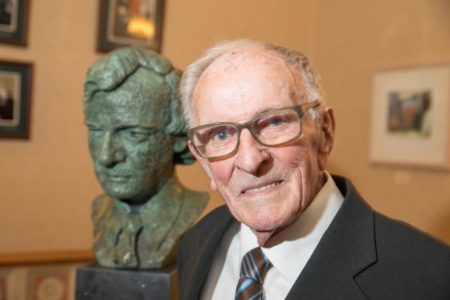 University College Cork and the School of History were deeply saddened to learn of the passing of Emeritus Professor John A. Murphy of Rosebank, Douglas Road and Macroom, Co Cork. He is sadly missed by his family, friends and neighbours.

A name synonymous with the University, Prof. Murphy had an association with UCC that spanned over seven decades, beginning in 1945 when he left his native and beloved Macroom to study History and Latin at UCC as a scholarship student.

A decade of teaching at Farranferris followed, before he returned to UCC to assume the role of Assistant Lecturer under Professor James Hogan in 1960. Subsequently appointed Professor of History in 1971, Prof. Murphy emerged as a leading and independent voice in contemporary Irish history authoring a number of important monographs, including the influential Ireland in the Twentieth Century. A standard bearer of cultural and political pluralism and a devotee of the Irish language, he earned national recognition and admiration as an inimitable orator and public commentator.

Twice elected to Seanad Éireann, Prof. Murphy was named Cork Person of the Year in 2005 in recognition of his life’s work, and was selected by the University as one of the delegation to meet the UK’s Queen Elizabeth II during her historic visit to Cork in 2011.

Aside from teaching Irish history to generations of UCC students, Prof. Murphy also played a crucial role in preserving the heritage of the University itself, authoring three books on our history: a monumental history of the first 150 years of UCC, The College, a shorter history, Where Finbarr Taught, and an illustrated history of sport in the University from 1911-2011, Where Finbarr Played.

He retired from UCC as Professor of Irish History in 1990 and was appointed the first University Historian in 2016.

Indicative of his status in the University, he was awarded an honorary doctorate in 2001, and a bronze bust of Prof. Murphy by sculptor Seamus Murphy RHA was unveiled at a special event held in 2017 in the Aula Maxima to mark his 90th birthday (photo above).

The entire UCC community is deeply saddened to learn of John A.’s passing. A giant of our institution, his own story is deeply intertwined with the history of UCC, a heritage he arduously worked at preserving. Upon meeting Queen Elizabeth II, he recalled ‘that history is a record of the past, not a chronicle of grievances’ and this principle guided his work and his teaching to generations of our History students. His contribution to our University is without equal, and on behalf of UCC, I wish to convey our deepest condolences to his family. Ar dheis Dé go raibh a h’anam dílis.

Dr Mervyn O’Driscoll, Head of the School of History at UCC said:

John A. performed an inestimable service to Irish history. A courageous professional, he was an important voice of independent reason and historical balance regarding Irish identity and society. John A. was never afraid to ask hard and searching questions. He remains an example to us all here. Neither will we forget his humour and ballad singing.

Visitation at O’Connor Bros. Funeral Home, North Gate Bridge on Tuesday March 1st from 5.00pm to 6.00pm. Cremation at The Island Crematorium, Ringaskiddy on Wednesday March 2nd at 4.00pm, which will be live-streamed on www.islandcrematorium.ie