Port of Cork Company gets award for helping Irish-American trade

The Port of Cork Company has been awarded the 2022 Ambassador’s Award by the Irish American Business Chamber & Network which was celebrated at prestigious events held simultaneously and attended by dignitaries on both sides of the Atlantic, on Friday, March 4th.

The Ambassador’s Award is an honour presented to the company (either in the US or Ireland) that plays a pivotal role to strengthen the economic and educational ties between the United States and Ireland. 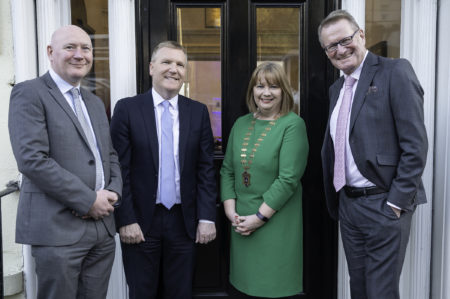 The Port of Cork Company has been awarded the 2022 Ambassador’s Award by the Irish American Business Chamber & Network which was celebrated at prestigious events held simultaneously both sides of the Atlantic. Pictured at the Cork event hosted by Cork Chamber were
Michael Walsh, Chairperson of Port of Cork, Minister for Public Expenditure & Reform Michael McGrath TD, Paula Cogan, President of Cork Chamber and Eoin McGettigan CEO of Port of Cork.

For the first time in its history, it has been awarded to three entities – the Port of Cork Company (PoCC), ICL and Penn Terminals for their collaboration to launch and maintain the Cork to Chester shipping route.

The route to the East Coast, which was launched in May 2020 is the only direct route from Ireland connecting to the US and serves Pennsylvania and North Carolina.

It provides Irish exporters with unprecedented opportunities, particularly for smaller indigenous companies, to develop business in the US.

In 2021, approx. 20,000 teu (twenty-foot equivalent units) of cargo was carried across the Atlantic from Cork with Irish exports such as medicine, lab tech, agri supplies, steel, nutrients, and infant formula. The weekly sailing has proven so successful that it is now serviced with bigger ships to cater for the demand.

Conor Mowlds, Chief Commercial Officer of Port of Cork Company who accepted the award which was presented by Dan Mulhall, Irish Ambassador to the US in Philadelphia, stated:
“We are very proud to receive this award in recognition of the positive impact our Cork to the US sailing has had to enable enhanced export trade opportunities for Irish companies, large and small, with America. This is particularly in the context that prior to the start of this shipping service, the last time liners regularly travelled between Cork and America was to enable migration.
We hope that the opening of our new Cork Container Terminal in the coming months, following an €86 million investment, will allow for further expansion of services and increased cargo volumes to the US.”

Lisa Maloney, President of the Irish American Business Chamber & Network stated: “The Port of Cork Company and its fellow partners were the clear front runners for this award which is symbolic of the long and historically significant relationship that exists between the US and Ireland, a relationship that precedes the American Revolution. I congratulate the Port of Cork and its fellow nominees ICL and Penn Terminals for the immense contribution their collaboration has made to strengthen the trade links between America and Ireland.”

Due to the unique nature of this year’s nomination, the award was presented to Port of Cork Company at a dual event held on Friday 4th March at a luncheon in Philadelphia with a live video link back to a dinner that took place simultaneously in Cork Chamber and was attended by Minister Michael McGrath among others.

Speaking about the award, Paula Cogan, President, Cork Chamber said: “In the context of Brexit and the ever-changing challenges to international trade, supply chain stability and movement of goods, the Port of Cork has excelled in building strong new trade links with the US. This timely recognition is an appropriate milestone as this relationship continues to build.”

About Port of Cork Company

The Port of Cork is the world’s second largest natural harbour and is a key international gateway for trade. It is the key seaport in the south of Ireland and is one of the three Ports of National Significance (Tier 1) as designated by National Ports Policy

As a multi-model port it is only one of two ports in Ireland to service all six shipping modes – lift on/ lift off, roll on/ roll off, liquid bulk, dry bulk, break bulk and cruise.

The Port of Cork Company (PoCC) is a commercial semi-state company responsible for the broad range of commercial running of Cork harbour as well as the navigation and berthage in the port.

In 2020, PoCC reported a traffic throughput of 10.5 million tonnes. The PoCC’s direct workforce is 150 staff, however it supports thousands of jobs through indirect employment through warehouses, hauliers and shipping agents.

PoCC is a hugely important catalyst for trade and employment, offering direct connectivity to a global supply chain particularly for FDI. 35 of its top customers are from industries such as Med-Tec, Pharma, IT, chemical and Agri-Food accounting for €145billion of manufacturing and supporting over 45,000 jobs directly in the southwest region.

The Port of Cork Company’s facilities and operations are situated at four distinct locations in Cork’s natural deepwater harbour: The City Quays provide the service for bulks, both Tivol and Ringaskiddy provide the lift on/ lift off, roll-on/ roll off and bulks services, while Cobh caters for cruise liners with Ireland’s only dedicated deep-water berth for cruise ships.

This is one of the most exciting periods of growth and investment for Port of Cork Company with a number of significant investment and redevelopment projects underway, including the €86 million investment towards its new deepwater Cork Container Terminal (CCT) in Ringaskiddy which is due to officially open in 2022. This is all part of the PoCC’s strategic efforts to enhance and future proof its offering and positioning as an international gateway for trade.