Blood Bike South will be the the ‘Grand Marshal’ of the 2022 Cork St. Patrick’s Day Parade. The Parade which is back after an absence of two years, will start at 1pm on Thursday March 17th. 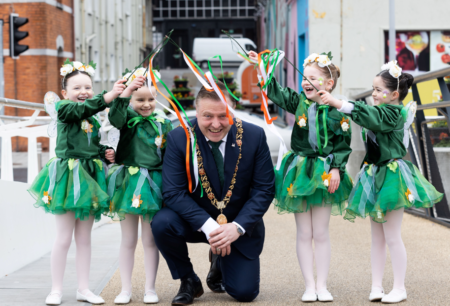 Blood Bike South are a Cork based charity, providing publicly-funded hospitals and other medical facilities with out-of-hours, free and voluntary motorcycle transport service for blood and other urgent medical materials. Throughout the pandemic, Blood Bike South have played a vital role in the transport of blood samples, medication, equipment and human donor milk to medical centres all over Cork.

Martin O’Driscoll, Chairman of Blood Bike South, said: “The members of Blood Bike South are delighted and honoured to be chosen as the Grand Marshal of the 2022 Cork St. Patrick’s Day Parade. As a group that usually operates in the dead of night, being seen in the light of day and in front of the people of Cork that we serve, is a true honour for our hard-working volunteers. It is especially noteworthy as we celebrate our 10th year in operation this year.”

The theme of this year’s Cork St. Patrick’s Day Parade is Heroes- Ordinary People in Extraordinary Timesandparticipants from community groups, arts groups and sporting groups from all over Cork will take part in the Parade. A selection of these include Rising Sun School of Karate, Indian Community Cork, Mayfield GAA, Sudanese Community Association and the Cork Barrack Street Band.

Ciara Sugrue, Head of Festivals at Fáilte Ireland, said: “It is fantastic to see St. Patrick’s celebrations return to Cork this year, supported by Fáilte Ireland. Festivals and events play a critical role in delivering brilliant visitor experiences and increasing footfall for local businesses, supporting jobs and revenue generation. We want to position Ireland as ‘the’ place to celebrate St. Patrick’s Day and with an amazing line up of entertainment, the Cork St. Patrick’s Festival will showcase the very best of the city.”

Created by Cork Puppetry Company, a giant Heart Portal, representing the pulsating heart of Cork, will be accompanied along the Parade route by a special Lock Down Puppet, druids and Prince Charming!

Cork Community Art Link will present two large-scale floats with approximately fifty participants. The floats will feature a giant articulated “granny” and a mechanised piloted biplane. Based on the theme of the festival, the elderly woman is the great matriarchal grandmother and our hero while the float of the plane represents the freedom and travel that has been denied the past couple of years as a result of the pandemic.

Joining Corkonians from the United States for the Parade will be members of Law Enforcement from Massachusetts State Police and members of the Philadelphia Irish Trad Tours who will be led by traditional folk singer and musician Donie Carroll.

See www.corkstpatricksfestival.ie for further details of the Parade and information on travelling into and around the city on the day.