County Cork in Ireland is no stranger to celebrities. Many stars have chosen Ireland’s largest County as the location for their summer home, to get away from the hectic schedules of the TV or Film industry.

While in the past; Celebrity chef Keith Floyd RIP used to have an estuary side home called ‘Creek Lodge’ on the Belgooly side of Kinsale, and Maureen O’Hara RIP used to own ‘Ludgine Park’ near Glengarriff.

One other entertainment star loves Cork so much she has favoured two parts of the County! Dame (knighted in April 2014) Angela Lansbury is now aged 96 and is famous for her portrayal of Jessica Fletcher in Murder She Wrote (1984-1996). Where does Angela Lansbury live? She has actually had two houses in different parts of County Cork over the decades. The more recent house is on the coast of East Cork, and prior to that the Irish-British-American actress used to have an older house very much inland at Conna, North Cork. 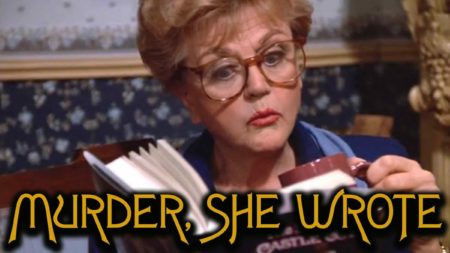 Jessica Fletcher brought us hours of enjoyment. We applaud Dame Angela for making this character so beloved, but did you know the actress behind the role has a Cork connection?

Conna is rural by any stretch of the imagination; It is 20 minutes East of Fermoy, or 40 minutes North East of Cork City. It is very much inland, whereas most celebrity hotspots in Cork tend to be near water. Situated on the River Bride. Conna village contains several pubs, a shop, a post office, a Roman Catholic church, and a nearby Church of Ireland chapel. The village is dominated by Conna castle, a five-story tower house situated on a limestone outcrop near the river. It was in 1970 that the Lansbury Family purchased Knockmourne Glebe. The solid premises had been constructed in 1827 for Rev. Thomas Spread Campion, the then Rector of Knockmourne and Ballynoe. Lansbury came to Ireland for a break, she described it as an oasis. Two of her children needed to tackle their addiction to drugs. The house’s rural location was its attraction. She used to cycle to Conna village. Lansbury left the property sometime between the 70s and 1990.

Landbury sold Knockmore Glebe in 1980. It is not clear when she sold the guest bungalow, but in recent years, in 2018 the Irish Examiner published some interior photos. The article referenced that it used to be precast concrete but had since been upgraded.

Lansbury came to Ireland for a break, she described it as an oasis. Two of her children needed to tackle their addiction to drugs. The house’s rural location was its attraction. She used to cycle to Conna village.

Designed by her friend the famous pottery maker Stephen Pearce; Lansbury has a U-shaped clifftop house on 9.2 (22.8 acres) hectares at Ballinwilliam, Ballycotton, Co Cork. It’s south of the village of Churchtown South. Lansbury first moved in with her husband in late 1992. The U shape is designed to create a sheltered courtyard, which neutralises the strong sea breezes. Architectural Digest visited the property in 2007. Lansbury spent summers and Christmas’ at the house, and it appears to still be in her ownership.

When Lansbury spoke at nearby Grainstore Entertainment Venue by Ballymaloe House, East Cork on 3 August 2014 she was in fine form:

Remember, a person’s home is their Castle (for Jeremy Irons quite literally!), so unless a star’s house happens to contain a public garden (such as Lord David Puttnam’s) or has an open day then it’s best to stay away. The internet allows a glimpse into celebrity life, but everyone is entitled to go about their business in peace.